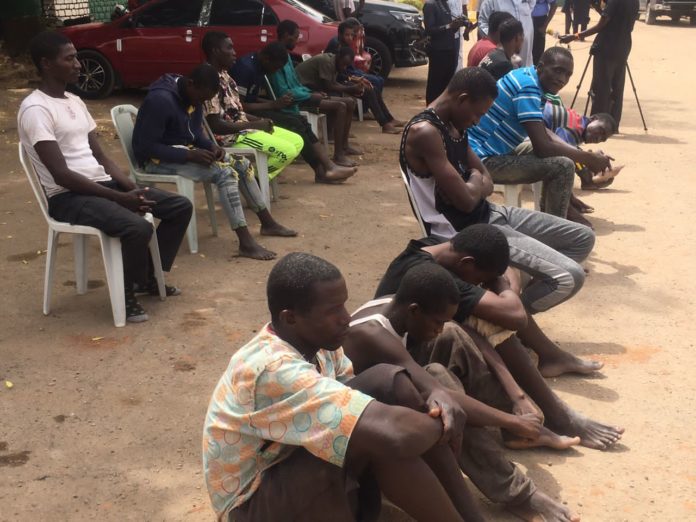 Two hundred suspected terrorists and 20 suspected armed robbers were on Wednesday, paraded by the Kaduna state police command.
Mohammad Jalige, spokesman of the command, paraded the suspects  at the command’s headquarters in Kaduna on behalf of Mudasiru Abdullahi, the commissioner of police.
He disclosed that 18 AK47rifles, 2000 live ammunitions of different calibre, 11 pump action guns, 10 locally fabricated pistols, seven vehicles of different brands and nine motorcycles were recovered from the suspects.
Jalige said the arrests were made between January to March, 2022, at different locations in the state.
He said among those paraded were the prime suspect in the murder Ahmed Maisaka, a retired airforce officer who was killed at his residence in Rigasa area of Kaduna metropolis sometimes in January.
Also paraded were suspected terrorists, said to have killed over 15 persons at different times.
According to Jalige, the arrest were made following the relentless efforts by the police to combat crime in the state.
He said, the relative serene security atmosphere currently being witnessed in the state was as a result of the strategic and tactical deployment of the special units of the force, undercover operatives, conventional police personnel as well as the purposeful synergy within the security architecture in the state.
“The sum of these approaches resulted in the successes we are showcasing today”, he said.
Jalige stressed that the partnership in the continuous fight against criminal elements as the quest of securing the society is everybody’s business.
He said, the Kaduna Command of the police was not unmindful of the security challenges bedeviling the state, stressing that, remarkable efforts were being made to address the situation.