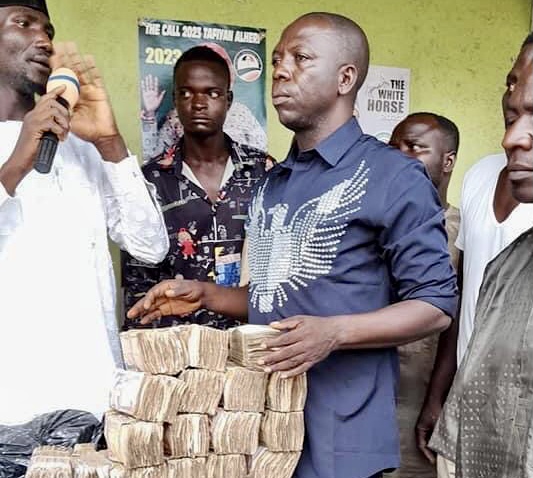 Tanko Rossi Sabo, one of the delegates in the just concluded primary elections of the Peoples Democratic Party (PDP), from Sanga Local Government Area of the state, has spent about N20 million from the election largesse to assist the less privileged and payment of WAEC and NECO exams to secondary school students.
According to the breakdown of his spending, N7 million was spent on payment of WAEC and NECO to secondary school students, while N100, 000 was given as logistics to the 5-man committee set up to go round the schools and pay the exam fees.
Sabo, had during his campaign for election as delegate, promised to give back whatever monitory benefits he made to the community if elected.
Giving a breakdown of what he gave to the people, he said, besides  payment of examination fees for students, he also gave N6.9m as assistance to 150 orphans and less privileged people in the communities cutting across party lines.
Similarly he said N3.2m was spent on the purchase of 42 customised jerseys, including goal keepers wears, socks and track-suit for the football coach to promote the game of football among the youths in the area.
The PDP Ward executives in Sanga LGA were not left out as he gave them N1.3m.
He further spent N700,000 to support elders, women and executive beggars known as “Maroka” with as well as one Danladi Janda with N100,000.
He plans to extend the gesture to the youths in Dogon Daji, Gani communities as well as samba boys of Bokana.
Sabo who published details of how he shared the money on his Facebook page, said in a telephone interview, that he participated in the state assembly, National Assembly, governorship and Presidential primaries of the PDP.
He said, “When I was campaigning to be elected delegate, I told my people that whatever I get as monitory benefit from the primaries, I will share with them.
“So I am just fulfilling the promise I made when I was campaigning to be elected as a delegate for the primary elections”.
Asked how much he made during the primaries, he said, “The money you will get depends on your connection with the politicians.
“I have alot of mentos and political leaders. There are some that contested for House of Representative and State Assembly primaries, but we couldn’t meet after their declaration.
“We later met in Abuja during the National convention. There were some that promised me something during the convention.
“All the money they gave me for my hotel accommodation and food I took it back to share with the people as I promised”.
Many people who commented on his Facebook page, commended him for his rare benevolent and asked politicians to emulate him for fulfilling his promises.