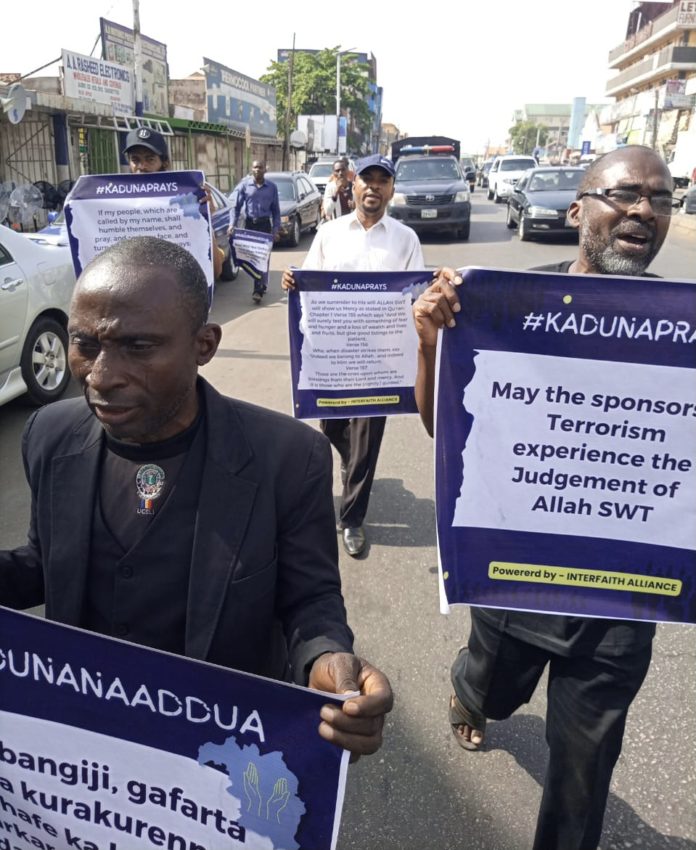 Some Christian clerics under the umbrella of “Interfaith Alliance,” on Thursday protested against the persistent terrorists attacks in Kaduna, calling on the federal government to go all out to deal with the criminals.
Kaduna has been the epic centre of terrorists attacks in recent time.
On March 26, 2022, the Kaduna international airport was attacked by terrorists, killing a security guard.
Two days after the airport attack, the terrorists attacked the Abuja-Kaduna passenger train, killing eight people, while many others were either abducted of injured.
Several communities and suburbs within Kaduna metropolis have been under constant attacks by the terrorists, almost on a daily basis.
The latest of such attacks was on Wednesday when the terrorists reportedly invaded Anguwan Juji and Angwan Gimbiya suburbs in Sabon Tasha area of Kaduna metropolis and abducted unspecified number of people.
The protesting pastors who gathered peacefully around the busy Lagos Roundabout with placards carrying various inscriptions, condemned the security situation Kaduna state.
They called on the federal gederal government to take urgent steps to tame the terrorists.
They noted that “although government was doing its best, the best was not good enough”.
The convener of the group, Rev. Emmanuel Adebayo, who addressed the gathering,
said government must go all out to end terrorism and all forms of criminality in the country.
He appealed to the federal government to compensate all the victims of terrorists’ attacks and award scholarships to children affected by banditry as well as rebuild communities ravaged by the attacks.
Adebayo said the government should be more proactive in whatever actions that are being taken against the terrorists.
“The essence of our gathering today is to put together what we refer to as “Kaduna prays”, as prayers work against insecurity.
“I am sure everybody knows that Kaduna is one of the states plagued by incidences of banditry and terrorism and various forms of criminality and of late, it has been on the increase”, he said.
He expressed disappointment with the federal government, saying Nigerians were not satisfied with the way the insecurity was being handled.
Adebayo said, “The government needs to be more proactive. We have been hearing about cry of our governor; he said he has been taken the reports to those concern; he said they know where they (terrorists) are, and that they listen to their telephone conversation but the response from the security agencies are not good enough.
“So we are praying that God should touch their hearts to put in more efforts and to be more responsive so that this issue of insecurity won’t be more reactionary but be preventive and we pray that God will give them more wisdoms on how to go about it in Jesus name”.