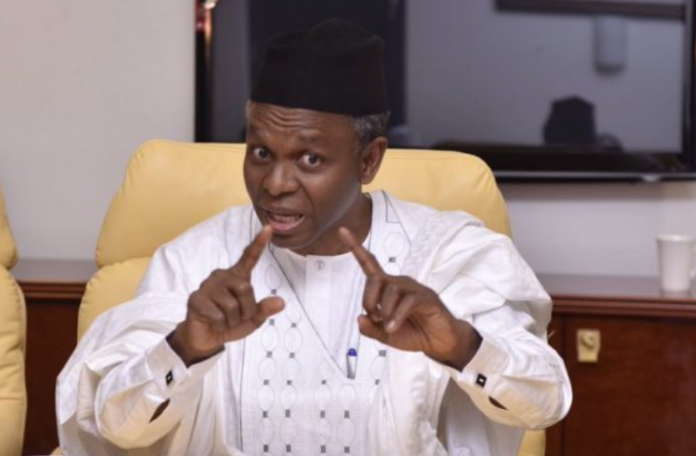 Governor Nasir El-Rufai of Kaduna State, has said that the Department of State Services (DSS), has a vital role to play in providing reliable information needed by the police, the Armed Forces and other security agencies for the total defeat of bandits, insurgents and other criminal elements terrorising the country.
The governor stated this while declaring opened the quarterly meeting of the Directors of the State Commands of the DSS in the North West on Thursday in Kaduna.  “As the lead agency for domestic intelligence and counter-intelligence, the Department of State Services has a vital role to play in providing the reliable information needed by the Police and Armed Forces and other security agencies for the total defeat of these dangerous insurgents”, El-Rufai said.
This, according to him, is an urgent priority, “in the face of the looming food crisis that we face if our farmers do not go to the farms.”
He said the “rains are here, but farmers in various communities are unable to go to their farms, that is when they are lucky not to have fled their remote villages under pressure and attacks from the criminals. This cannot be allowed to continue.”
El-Rufai said, security agencies need to strengthen intelligence gathering, not just to establish the identities, plans and locations of criminals, but to actively disrupt their capacity to organise and mount attacks on citizens using credible
intelligence available from the DSS.
He lamented that the “security deficits have devastated the rural economy, taken lives and property and made simple travel an ordeal across federal, state and local roads.”
He said addressing “this grave problem and restoring order, require that security managers and intelligence agencies constantly share information and experiences.”
According to the governor, the criminals operate across state lines, stressing that, tackling them requires cooperation and collaboration by the various states.
He said, “Any plan that seeks to address the problem only in one state will at best yield a temporary respite as the criminals retreat to safe havens in places where there are no active and continuous counter-insurgency operations.”
He recalled that in 2015,
governors of the North West states and Niger State came together to fund simultaneous operations by the military and security agencies across the largely ungoverned Kamuku-Kuyambana forest that straddle about seven states.
“These operations disrupted the cattle rustling gangs but were unfortunately not sustained as a continuous exercise to dominate these spaces and assert within them the authority of the Nigerian state.
“That the criminal gangs have become more daring and dangerous since recovering from their near defeat in 2015 is obvious across the country”, the governor said.
He commended the DSS
for the meetings “and developing a collective perspective, rather than operating in silos.
“This is what we have tried to encourage across our military and security agencies here in Kaduna state…”
He commended security agencies in the state and assured them of continuous support.
“Security management is a thankless job, I received your reports every day I read them, and I know how many attacks or planned attacks that have been plotted, that have been stopped, people do not know about this, they only know when something happens.
“People always say our security agencies are doing nothing, but we know how many of you are killed in the line of duty, and I just want to say on behalf of the Government and people of Kaduna State, we appreciate you even if what you see in the media is lack of appreciation”, El-Rufai said.
He said his administration has invested so much in security for the past five years, pointing out that besides, the usual donations of vehicles, radio equipment, etc, the state government has been installing a Closed-Circuit TV (CCTV) system across Kaduna Metropolis.
He said the project will be completed within the next one-year adding that the police and other security agencies will be empowered to be able to take pre-emptive action to deter criminals.
He also said the state government has invested in drones, “and we are investing in more drones, working with the Airforce and the SSS to see that these drones are deployed to provide additional intelligence.”
He added that the state government is building a forensic laboratory to help the police and other security agencies in crime detection and prevention.