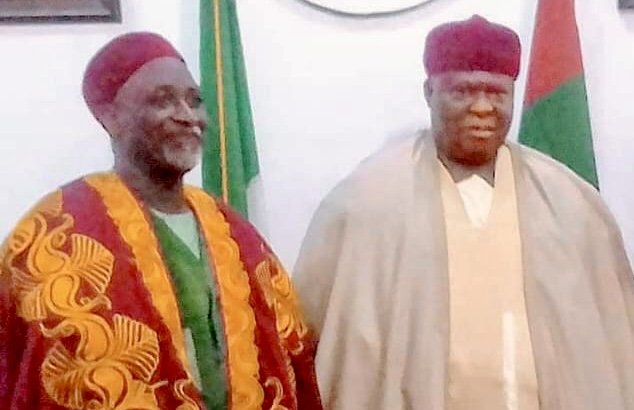 The Gbong Gwom Jos and Chairman of the Plateau State Council of Chiefs and Emirs, Da Jacob Buba, has urged parents to inculcate positive values and teachings that would make their children good citizens in the community.
Speaking in his palace on Thursday at the coronation of Chief Samson Grimah as the new “Wakilin Mada of Jos” (representative of the Mada people in Jos), Buba said, if parents bring up their children in a proper way, it will minimise unruly behaviour and lack of respect to constituted authorities which has become very worrisome among the youths.
The traditional ruler expressed disappointment over over recent development among some Mada people in Jos, who according to him, wrote letters insulting traditional rulers in Madaland, following the emergence of Grimah as the Wakilin Mada in Jos.
“I am not happy with some letters written by some Mada sons insulting their leaders and rulers.
“This is ungodly and not proper. We must learn to respect constituted authorities”, Buba said.
He called on parents to “train their children in the way of God, and they would not depart from it.”
The paramount ruler of the Berom nation said, “If we were not trained in a proper way we, will not be here today.
“The training of our children, if properly done, will reduce cases of lack of respect for constituted authorities and those in leadership positions”.
He also expressed concern over the security situation in the country and called on parents to closely monitor the activities of their children and caution them against indulging in criminal acts.
He attributed the incessant attacks being carried out across the country partly to the failure of parents to inculcate positive values in their children.
He commended the Chun Mada, the paramount ruler of the Mada nation, Pastor Samson Yare, for the development strides among the Mada people.
Recalling his days at Government Secondary School (now Government Science School), Kuru, Plateau State, Buba said he met some brilliant and intelligent Mada students in the school.
He said one attribute of the Mada students during his days in GSS Kuru, was their respect for colleagues and the school authority.
He said the selection of the Wakilin Mada in Jos, followed due process and in accordance with the law.
He said, “The (Mada) community selected whoever they wanted and he is accepted by us in the council.
“From now henceforth, he would be the person to represent the Mada community in the affairs of the traditional council in Plateau state.”
He explained further that the coronation of Grimah was done because “it was confirmed that he was selected by the College of Selectors (King Makers) of the Mada community in Jos and confirmed by the Chun Mada, Pastor Samson Gamu Yare.
“I received a letter from the Chun Mada and we discussed at length, before my decision to install the new Wakilin Mada in Jos”.
In his remarks, the Chun Mada, thanked the Gbong Gwom Jos for being a father to all in Jos.
Represented by the District Head of Angwan Zaria (Rinze), Akwanga LGA, Nasarawa state, Alhaji Haliru Ja’afaru, the Chun Mada, noted that many Mada people had made Plateau state their permanent aboard and may not return to Akwanga, their ancestral home again.
“They are now your children, govern them as your people and always get them involved in whatever you want to do in Plateau State,” Yare said.