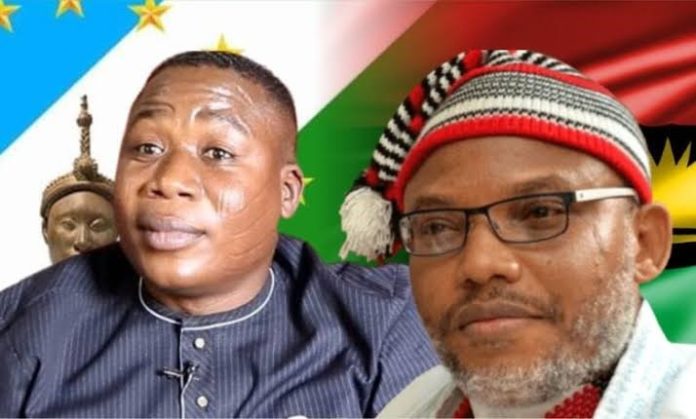 The book, entitled Accidental Public Servant, by the current governor of Kaduna State, Mallam Nasir El-Rufai, published in 2013, is a story of how he transformed from a private entrepreneur to rise to the top  of the country’s political hierarchy, without actually planning to become one. In other words, the book is about how the ebullient quantity surveyor, transmuted from being a small player in the corporate world to becoming a big player in the political terrain, not through any careful strategies or tactics but simply by accident.

The same can be said of Nnamdi Kanu and Sunday Igboho, respectively the two symbols of the present sectional agitations on behalf of the people of South East and South West geopolitical zones of the country.

By their pedigrees, there is nothing in their history to suggest they were prepared for the present enormous tasks they have embarked upon. Kanu for example is a prince. He schooled at the prestigious University of Nigeria Nsukka and is a British citizen in addition to his holding a Nigerian passport. Even though Igboho on the other hand, is not a blue blood or fortunate enough to acquire university education like Kanu, he was still not expected to be in the forefront of agitating for the separation of his people from Nigeria. As a matter of fact, Igboho’s lack of tertiary education is viewed as a misnomer for him to be the torchbearer in the struggle for emancipation of a race arguably reputed to be among the most educated groups in Nigeria. But here they are. A prince and a wannabe, accidentally becoming freedom fighters, who had been unwittingly promoted and brought to the world’s stage by the unnecessary tough actions against them by the Federal government of Nigeria.

When has it becomes a crime to demand for freedom through peaceful means? It is enshrined in the United Nations Charter of Human Rights, to which Nigeria is a signatory and even in the Nigerian constitution, to freely express one’s grievances openly through peaceful protest and rallies, without any form of maltreatment or molestation by the government. Even those who demand freedom through violent means are normally called to a roundtable for discussions and negotiations, otherwise the inevitability occurs. As former US President, John F. Kennedy famously said in 1962, “those who make peaceful negotiations impossible, make violent revolution inevitable”.

This has been proven times without number throughout the annals of history. The Sinn Fein organization in Ireland, founded in 1905 by Arthur Griffith, has continued till date to demand Irish national sovereignty and self-determination to govern themselves rather than being part of Great Britain. The hardline stance of London has resulted in decades of numerous deaths and destructions. Even though, a part of Ireland, in the form of Northern Ireland is still part of Great Britain, it is a case of ‘no peace for the rope, no peace for the bird that perched on it’. Pakistan, sick of the Sikh Empire, seceded from India in 1947 to have their own nation, through violence, wars and deaths, which still go on even till today, even after their separation. It’s abominations and taboos for Pakistani to marry Indians. On the few occasions that such had occurred, their homes are like scenes from Fuji House of Commotion. The once indivisible Soviet Union, were fragmented into more than 13 countries in 1991 after many decades of rancorous union. Even Great Britain itself has moved out of Europe after Brexit regulations come into force this year. In other words, you must now obtain British visa as a French, German, Spanish, Italian, Portuguese or any other European citizen, just like any other citizen outside Europe, if you want to now travel to UK.

So, there is nothing out of ordinary in what Kanu and Igboho are demanding, namely, wanting out of a marriage in which they are effectively treated as slaves, where they were supposed to be treated as equal partners. The reason why there is divorce provision in a marriage between a man and a woman, even though they both profess to stay together till death do them part, is because of the possibility of having irreconcilable differences. And in the opinions of Kanu and Igboho, such now exist between their peoples and Nigeria.

But we need to recollect that, Kanu at the onset of IPOB and Igboho now, were generally peaceful in their demands. It wasn’t until government snarled at Kanu with ‘Operation Crocodile’ involving combined military and police forces that killed hundreds of innocent people who were having peaceful protest in the heartland of the Igbos, that Kanu went underground and surfaced later clandestinely as a wounded lion. He has subsequently triggered a chain of calamitous events that have now become a monster and big international embarrassment for the Nigerian government.

In Igboho’s case, he did not even initially demand for the separation of his Yoruba people. His initial demand, which he still insists on today, is for the armed Fulani herdsmen, within the territories of the South West region, causing mayhem by destroying farmlands, killing indigenous farmers, raping and kidnapping their wives and daughters, to vacate their lands. This is a legitimate demand. The kind of atrocities being committed by the herdsmen are horrendous and dastardly, but the government seem nonchalant to curb them.

The allegation that President Muhammadu Buhari, himself a Fulani and a herdsman, condones the actions of these criminals, because of shared interest and same ethnicity, would not go away and more importantly, does not seem to bother the President. As many Southerners have opined, no Nigerian of Yoruba or Ibo extraction, can dare to think of doing in the North, one percent of the criminalities these herders commit in the South. That was what Igboho demanded, that is: leave my father’s land and relocate back to your place. No more no less. The lackadaisical attitude of government to this demand consequently snowballed into Igboho’s demand for the separation of Yorubas from Nigeria to form their own nation. He did this through peaceful demonstrations within the enclaves of South West region, not outside of it.

However, in a flagrant show of might over right, the government not only turned deaf ears to his demand, it sent a truck-load of armed security personnel to his house, who went there and killed, maimed and arrested his family members and aides.

An auspicious moment the government should have used to enter into dialogues with Kanu and Igboho to proffer reasons and solutions on why their demands are not tenable, was unfortunately wasted and instead went for the sledge hammer. Afterall, at the heart of the duo’s demands, is simply better condition for their people. But instead of applying reasoning to the situation, the government thought it best to unleash its anger on the two.

Nothing good will come out of this on the part of government, except a red face. The government has so much in its hand than dissipating energy on two individuals that could be ignored or at best address their grievances. The Buhari administration has less than two years in office. In less than a year, the campaigns for 2023 will reach fever pitch. I would have thought that these few months before the campaigns get into top gear, is the best period to press home the few legacies it wants to leave behind. Alas, the elephant finds it expedient to destroy the forest in pursuit of a rat that stepped on its toes!

Whatever happens to Kanu and Igboho, they have been elevated to the exalted positions of possible deities in the future folklores of their people, thanks to the imprudent actions of the Nigerian government.