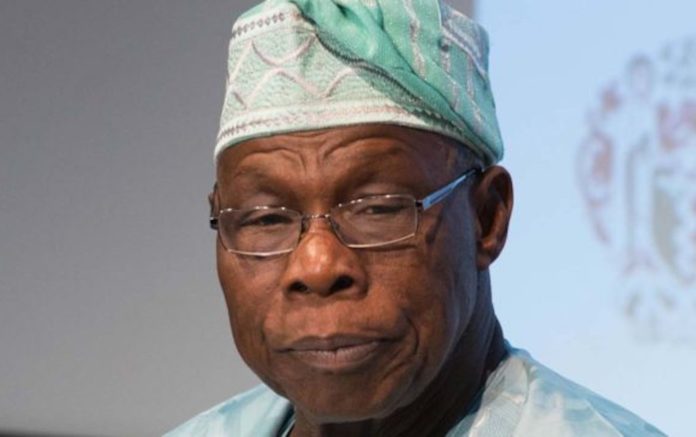 Former President Olusegun Obasanjo has declared that he will never return to partisan politics.
Obasanjo stated this on Saturday the National Working Committee ,(NWC) of the Peoples Democratic Party (PDP) led by its chairman Dr. Iyorchia Ayu paid him a visit at the Olusegun Obasanjo Presidential Library (OOPL) in Abeakuta, Ogun state.
Obasanjo had announced in February 2015 that he was quitting partisan politics and had publicly tored his PDP
membership card.
He however said despite his retirement from politics, he will not retire from the welfare and well being of the people in his community, the state and the country, since politics is about the welfare of the people.
“I have been with the party (PDP) right from inception… I became president on the platform of PDP. PDP will continue to be part of the history of my life,” Obasanjo said.
He said the day that he decided to tear his PDP membership card in his ward was the day he ceased to be a member of the party.
“I vowed that I will not be a member of any political party again, but I will remain a statesman in Nigeria, in West Africa, in Africa and indeed in the world”, Obasanjo said.
Speaking further he said, “But if I retired from partisan politics, if politics is welfare of the people, I must not retire from the welfare and well being of people whether in my own community, in my own state, in my own country, anywhere in Africa or indeed anywhere in the world and that is why I have the type of responsibility that I now have in the horn of Africa which is not an easy responsibility, but it has to be done, but I will say that your own responsibility is not an easy one either, but it has to be done.
“But bear in mind and I want to emphasise that I am no longer in partisan politics and there is nothing that will bring me back to partisan politics, but I will always be interested in what is good for Nigeria and anybody who wants to have my advice, I will distinctingly give it in the best interest of Nigeria and in the best interest of Africa.”
Earlier speaking, Ayu thanked the former president for the
great work he did for the PDP as the first president.
“Your period as president under the platform of PDP was seen as the golden era of the PDP because not only did you grow the economy to be the biggest economy in Africa , you were able to eradicate Nigeria from slavery by negotiating and cancelling so much of our foreign debts that would have made it very difficult to run the country”, Ayu recalled.
He noted that by the time Obasanjo left office, Nigeria was totally set free adding that direct foreign investment was also on the increase on a daily basis and Nigerians were respected around the world.
“I remember I accompanied you as your minister to a number of countries, Germany , India, I saw the respect they accorded you in India and I was very proud to be a Nigerian.
“Today, unfortunately, we don’t have the same recognition because what we have has fell short of leadership that Nigeria deserves”, Ayu lamented.
He said when Obasanjo was in power he treated every Nigerian as one family.
“You didn’t discriminate against the South, the East, the West or the North.
“Even though in your first tenure, the South West didn’t actually support you, but you brought them back on board and they supported you in your second tenure.
“It is our prayer that you will continue to try and support us. In Africa today, I think in all modesty, after the departure of president Mandela ,there is only one person of such stature on the African continent and we are proud that, that person is a Nigerian and that Nigerian is no other than president Olusegun Obasanjo and you have continued to display the leadership because it is wrong to address you Nigerian leader or Yoruba leader or an Owu Chief”, the PDP National chairman said.
Among the delegation were the National Secretary of the PDP, Senator Sam Anyanwun, the Deputy National Chairman, South and former Deputy Governor of Oyo State, Mr Taofeek Arapaja, and the PDP Vice Presidential Candidate in the 2019 Election, Mr. Peter Obi.
Also on the delegation were, Dr Olusegun Mimiko, Sule Lamido, Donald Duke and Liyel Imoke, former governors of Ondo, Jigawa and Cross River states
respectively.