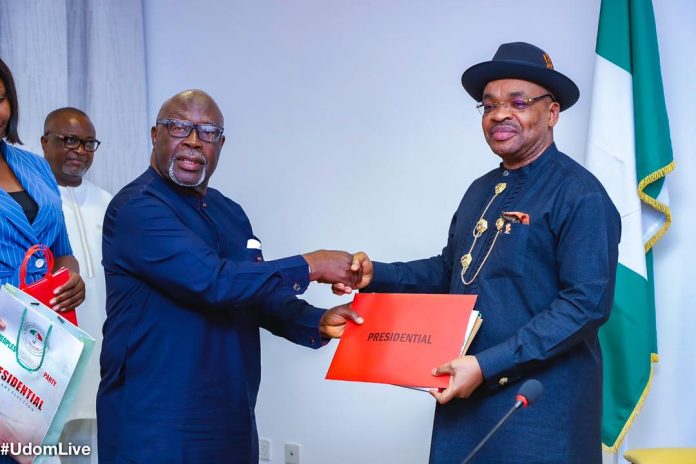 Brekete Family, a popular reality television and radio programme focusing on human rights issues, has purchased the Peoples Democratic Party (PDP) presidential nomination form for Akwa Ibom state governor, Udom Emmanuel.
TheCable reports that the form was presented to governor on Friday at the Government House in Uyo by a delegation from the organisation.
Speaking at while presenting the form the governor, leader of the delegation, Innocent Orji, said the organisation decided to buy the form after it came to Akwa Ibom and discovered that the governor had done more than what he had said when he featured on their interview programme.
“We all agreed that if you can do these in a state, if given that opportunity, you will do even better in the national level,” Orji said.
“We don’t believe in too much talk. So, here today, we are presenting to you the nomination form for presidential candidate of your party,” he said.
Receiving the form, the governor thanked the founder of Brekete Family, Ahmed Isah and his team and all those who contributed towards the purchase of the form.
“Honestly when I heard this plan to buy me a presidential nomination form was going on, I asked myself, ‘how can they raise up to N40 million to go and buy me a form?’ But today, it has become a reality,” the report quoted the governor as saying.
“There are over 200 million Nigerians, but you chose to accord me this honour and privilege, and I don’t take this for granted. I really want to appreciate this family, I register my appreciation to all Nigerians for this confidence.
“Rest assured that I have accepted the form. All Nigerians cannot come together to give me something and I refuse. Anyone with the experience of running a state in Nigeria for eight years can pilot the affairs of the country.”