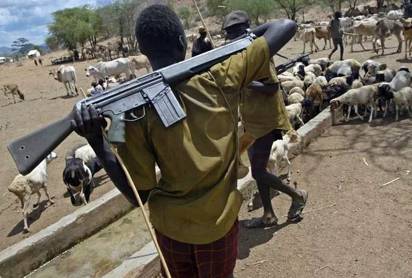 Gunmen suspected to be fulani herdsmen  have killed 30 people No fewer than 30 people in an attack on Odugbeho village in Agatu Local Government Area of Benue State.
The herdmen were said to have invaded the village at about 5:45pm on Sunday and started shooting sporadically, killing anyone on sight.
They were said to have disappeared into the bush around 6:40 pm after killing many people.
Eyewitness said the death toll could be more as more bodies were being recovered from the bush and other settlements.
“We cannot stay any longer to recover all the dead bodies this night because it is dark and no security. I believe more bodies will be recovered when the day breaks and security agents are around,” a resident of the community said.
The herdsmen were believed to have come from Nasarawa state, passed through the neighbouring Gwer West Local Government in a daring manner taking the villagers by surprise.
The high number of casualties was said to be due to the fact that it was a Sunday and most people were at home.
Confirming the incident, the Chairman of Agatu LGA, Mr. Sule Adoyi, said 27 bodies were recovered from the scene of the attack, adding that a search team was combing the bushes for missing people.