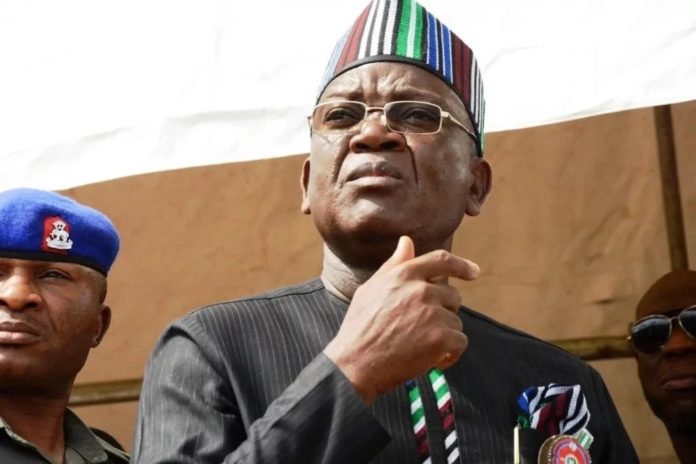 Three kinsmen of Samuel Ortom, governor of Benue, have been reportedly killed by suspected herdsmen.
The gunmen were said to have attacked on Saturday at 5 pm when they blocked the Lordye-Gbajimba road in Guma Local Government Area of Benue state.
The Chief Press Secretary of the governor Nathaniel Ikyur disclosed this in a statement in Makurdi.
The statement, said the victims made up of two males and females were riding on a motorcycle when they were ambushed and shot dead by the gunmen.
“The victims were riding on a motorcycle when they were ambushed and shot dead by the killer herdsmen who have taken over parts of the local government bordering Nasarawa state,” Ikyur said.
Security agencies who recovered the bodies said those shot died on the spot from gunshot wounds while the other was brutally macheted to death.
According to the statement, “Soldiers attached to operation whirl stroke recovered the bodies and deposited the corpses at Gbajimba general hospital.
“This has been the plight of Benue indigenes in the hands of fulani herdsmen who have invaded the state in a bid to take over our ancestral lands.”
Meanwhile eight kidnap victims were on Saturday rescued by troops from Operation Whirl Stroke (OPWS) in the state.
The victims who hail from Agasha town in Guma LGA of the state were kidnapped on their farms by herdsmen on Wednesday, February 16th, 2022, according to a statement on Sunday by Ikyur.
He said the victims spent over three days with their abductors before they were rescued by the military.
“Special Adviser to the Governor on Security, Lt. Col Paul Hemba (rtd) who briefed the Governor on the successful rescue operation, explained that the gallantry of troops from Operation Whirl Stroke who made contact with the kidnappers at Gbekyor led to an exchange of gunfire with the perpetrators and over powered them.
“The superior fire power of the soldiers overwhelmed the kidnappers who fled in disarray, leaving behind the kidnapped victims” statement said.
The statement listed the rescued victims as
Philip Akpage, 56yr-old, Aondokula Ijah, 30; Mrs Kwadoo Takada, 60; Mrs Kwakuma Asongu, 55; Mrs Agnes Ornguze, 54; Mrs Yanguchan Tiv, 45; Mrs Kwadoo Mtomga, 45 and Mrs Mnembe Terlumum, 30.
Ikyur said the victims had since, been reunited with their families.