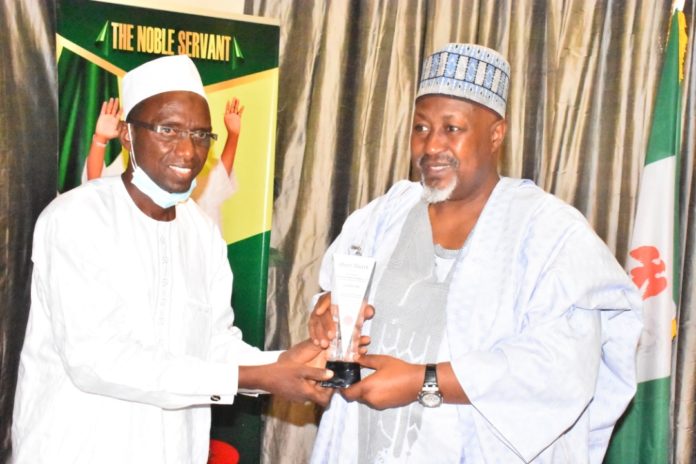 Acknowledging the successes recorded in increasing immunization coverage and reducing infant deaths from vaccine preventable diseases in state, Governor Badaru Abubakar, has pledged to support an iNGO, New Initiatives – All Babies Are Equal Initiative (NI-ABAE) in its Conditional Cash Transfer (CCT) programme.
NI-ABAE is providing cash to mothers as incentives to encourage them to take their children for routine Immunization.
“You can count on our commitment to support this noble objective and I believe together with this and the little effort in the state, we are able to increase in our immunisation rating,” the governor said, while responding to a brief during an advocacy visit to him by officials of the NGO.
Abubakar said such collaboration would improve public healthcare delivery for sustainable social and economic development of the state.
The governor who said Jigawa’s current immunisation coverage is 45% at the national level, noted that, “If at the national we have to increase that level, this initiative will help us with some more, because it is costed, it is money you spend today and will help you not to spend more in the future – it is just like investment; invest in immunisation, and you don’t spend money on hospitalisation.”
The governor described the activities of the NGO as classical example of investment in Human Capital Development that could enhance social and economic development of any given society.
“I want to personally thank you on behalf of the citizens of Jigawa state, for saving the lives of our children and for giving them better lives through immunisation,” the governor added.
Earlier while briefing the governor, leader of the delegation, who is also the Stakeholders Relations Director, Nura Muhammad, disclosed that over 110,000 infants had been enrolled in the state, for which more than N327 million has been provided as direct cash transfers to their caregivers.
He said each caregiver receives N500 for each of the first four routine immunization visits and N2,000 for the fifth immunization visit.
“New Incentives also supports existing routine immunization systems by engaging in vaccine supply review, supporting top up of vaccine transportation, participating in supportive supervision, capacity building of health workers and conducting vaccination advocacy with religious and traditional leaders.
“There is strong evidence that our intervention is making a significant impact in increasing demand for routine immunization in the communities where we work.
“Considering the impact of the initiative at four selected pilot local government in Jigawa state, Your Excellency we urged you to advocate and promote the ‘Cash Transfer Incentive for Routine Immunization’ programme at Nigerian Governors Forum.”
“We are optimistic that, if routine immunization coverage increased in the North and Nigeria at large, the National Indices for Child Mortality rate would certainly drop down,” Nura said.
Speaking further on the success story of the iNGO, Nura said it was named a GiveWell Top Charity in November 2020 and based on the recommendation of GiveWell, it is being funded to the tune of $16.8 million USD over the next 3 years to reach more than 600,000 caregivers and their infants in Jigawa, Katsina and Zamfara states.
He urged the governor to therefore assist the NGO in convening a joint programme update meeting of Katsina, Jigawa and Zamfara state governors in Abuja, assuring on its willingness to host the meeting.
Nura also requested the governor to consider becoming an advocate of Conditional Cash Transfers for Routine Immunization, especially defending conditional cash transfers programs among health stakeholders at national level.
The governor was presented with merit award by the iNGO as CHAMPION of conditional cash transfers for routine immunization in recognition of his effort and commitment towards routine immunization and primary health care services in Jigawa state and the country at large.