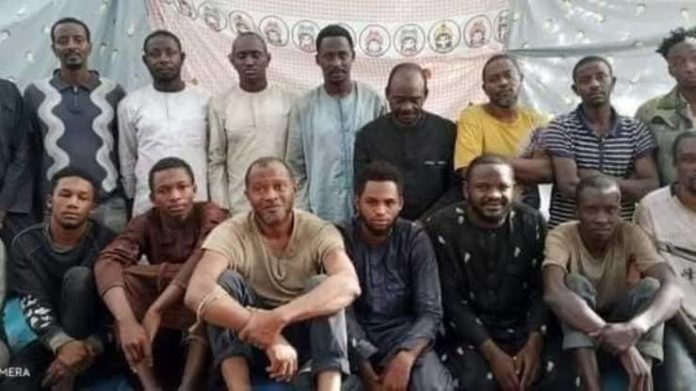 Five of the remaining 39 abducted passengers of the Abuja-Kaduna train attack have been released.
Tukur Mamu, media consultant to Kaduna based Islamic Cleric, Sheikh Ahmad Gumi, confirmed that they were release on Tuesday.
Mamu had been in the forefront for the negotiation for the release of the victims before he withdrew .
He said the released victims visited him in his office in Kaduna to thank him for his role in negotiations the release of victims that were earlier released.
Four of the victims were released on July 25, 2022. So far 34 of the victims are still being held captive by while a total of 27 had been freed.
Mamu also shared a recorded video of three of those released on WhatsApp.
Speaking in the video, one of the victims, Mustapha Imam, an associate professor of Medical Biochemistry at the Usman Danfodio University Sokoto urged the government to ensure the immediate release of the remaining victims.
He described his experience in the hands of the terrorists as terrible, saying he will never wish his enemy to be treated like that.
He said, “You can see, I just finished shedding tears of joy.
“I happy that I am free to and would be reunited with my family very very soon. “The experience I have been through in the last four months is not something that I will wish my enemy. The situation was really terrible.
“In the last two weeks, we were okay. But for the three and a half months we were actually very very hungry. There were days we ate once in a day.
“I was the medical doctor in the camp. I was treating captives as well as the bandits.
“There was no medication in the camp. There was a lady who went into coma because there was no medication to treat her of malaria.
“I will like to call on government to take whatever necessary steps to ensure the release of the remaining people”.
Also in a recorded video, Mamu said “all the five released victims were in his office in Kaduna on Tuesday afternoon immediately after their released to thank him for his past efforts.
“I keep on saying that there is nothing dialogue and negotiation will not achieve.
In a situation where guns will not work,dialogue will certainly work.
“I said before that I had withdrawn from anything that have to do with negotiation because of the situation we found ourselves and because of government lack of interest in this matter.
“What brought these release victims to my office this afternoon is that they came purposely to thank me for my past efforts in engaging with their abductors to ensure than none of them is harm”, he said.
He appealed to the government to pursue the release of the remaining victims as soon as possible.
According to Mamu, “More than 80 per cent of the victims in the bushare very poor and cannot negotiate their release.
“Government has to come to the side of the remaining victims to bring an end to the trauma”.
On March 28, 2022, an Abuja-Bound passenger train was attacked by terrorists.
Eight people were killed, many others were injured while 61 were abducted.
Some of those released were said to have paid as much as N100 million as ransom for their release.