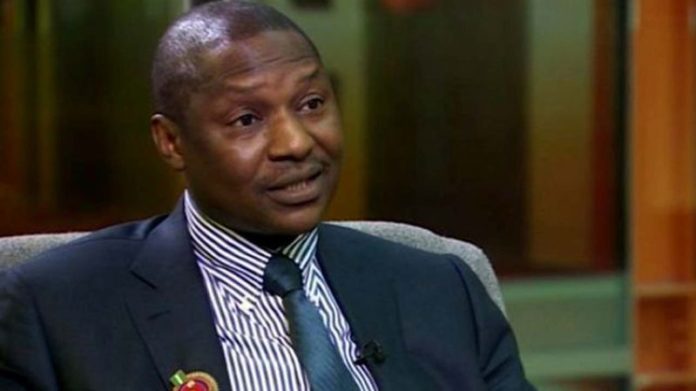 The Attorney-General of the Federation (AGF), has said that the federal government will effect a court judgment which ordered the removal of section 84 (12) of the amended Electoral Act, 2022.
On February 25, President Muhammadu Buhari assented to the electoral act amendment bill passed by the National Assembly.
However, while assenting to the bill, Buhari had, asked the National Assembly to delete section 84 (12) of the act, which provided that: “No political appointee at any level shall be a voting delegate or be voted for at the convention or congress of any political party for the purpose of the nomination of candidates for any election.”
However, on March 9, the senate rejected the president’s request to amend the clause in the electoral act.
Delivering a ruling on Friday in a suit marked FHC/UM/CS/26/2022, the Presiding judge, Justice Evelyn Anyadike, held that the section was unconstitutional.
Anyadike noted that sections 66(1)(f), 107(1)(f), 137(1)(f) and 182(1)(f) of the 1999 constitution already stipulated that government appointees seeking to contest elections are only to resign at least 30 days to the date of the election.
In a statement issued on Friday by Umar Gwandu, Malami’s spokesman, said the federal government will take the necessary action on the court ruling.
According to the statement, the judgment of the court will be recognised by the government printers in printing the Electoral Act.
“The Act will be gazetted factoring the effect of the judgment into consideration and deleting the constitutionally offensive provision accordingly.
“The provision of Section 84(12) of the Electoral Act 2022 is not part of our law and will be so treated accordingly.
“This is in line with the dictates of chapter 7, Part 4, Section 287 of the 1999 Constitution of the Federal Republic of Nigeria (as amended) on enforcement of decisions that makes it a point of duty and obligation on all authorities and persons to have the judgment of the federal high court, among others, to be enforced”, the statement said.