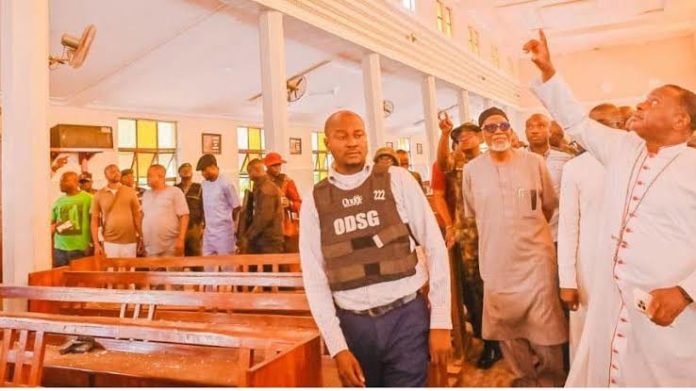 The federal government disclosed that the Islamic State of West African Province (ISWAP) was responsible for the attack on St. Francis Catholic Church, Owo, Ondo state.
The Minister of Interior, Rauf Aregbesola, made the disclosure on Thursday in Abuja, while briefing State House correspondents at the end of the national security council meeting presided over by President Muhammadu Buhari.
The minister, alongside the Inspector General of Police, Alkali Usman who briefed journalists, said the police has been ordered to go after the perpetrators of the act and bring them to justice.
According to the minister, the imprint of ISWAP was found on the scene of the attack, assuring that they will be brought to justice.
Aregbesola, said the aim of the terrorists group is to use the attack to divide Nigerians and create an impression of an ethnoreligious war.
On June 5, gunmen attacked the church, killing many worshippers and injuring several people.
The gunmen were said to have detonated explosives in the church after which they proceeded to fire several shots at the congregation.
About 40 people died in the attack while over 60 victims were still hospitalised.
Rotimi Akeredolu, governor of Ondo, had described the attack as an “attempt to test the will of the people of the state and indeed, the south-west”.
“At Owo, the anger was palpable. The tension was at an abrasive level just as the urge for reprisals was high,” he said.
“Without doubt too, the ripple impact of this heinous act, as well as the understandably angry reaction across the state, could not have been different.
“To me, this is an attempt to test the will of the people of the state and indeed, the south-west.”