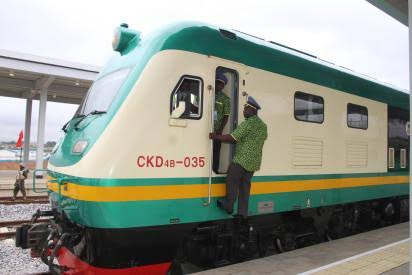 The federal government has said that it will be insensitive to resume the Abuja-Kaduna train service while abducted passengers are still in captivity.
The minister of state for works and housing, Mu’azu Sambo, state this on Wednesday while briefing state house correspondents after the federal executive council (FEC) meeting presided over by President Muhammadu Buhari.
The train was attacked by terrorists on March 28, 2022, resulting in the killing of eight people while 62 others were abducted with many others sustaining injuries.
The terrorists have so far released 34 of the victims after collecting millions of naira as ransoms. About 28 of the victims are still in captivity.
According to the minister, the resumption of the Abuja-Kaduna train service, would translate to insensitivity, adding that, there is a need to have surveillance facilities to monitor the tracks.
The minister said the government is looking at the best options in terms of surveillance, including concessioning it in a public-private partnership (PPP) arrangement.
“It will be insensitive to restart the service if some families weep day and night over their family members still in the bush”, Sambo said.
He disclosed that, the council approved a contract for the Nigerian Railway Corporation (NRC) worth about N1.49 billion for the repair of cranes.