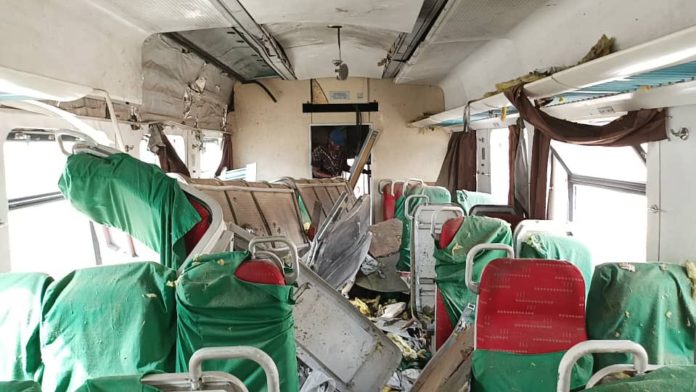 Relations of kidnapped victims of the Abuja- Kaduna passenger train attack, have warned that they will resist any attempt by the Nigerian Railway Corporation (NRC) to resume train services without rescuing their loved ones.
They also lashed Rotimi Amaechi, minster of transport for being for declaring his presidential ambition days after the train attack, saying he is insensitive to the plight of the people and should resign.
On March 28, 2022, the train which was conveying passengers from Abuja to Kaduna was attacked around 8:30 pm by terrorists, killing eight people, as 26 people people were injured with many others abducted.
The relations had on Tuesday issued a 72 hour ultimatum to the federal government to ensure the release of the victims or be allowed to negotiate with the terrorists.
Addressing a news conference on Friday in Kaduna, Abdulfatai Jimoh, leader of the families of the kidnapped victims,
however, said after the expiration of the 72-hour-ultimatum, the federal government has started discussing with the terrorists.
“We are happy that the government has started discussing with the abductors of our relatives”, he said.
He appealed to the government to speed up the negotiations process with the terrorists for the release of their loved ones.
He said the families of the victims have been in trauma since the incident and urged the government to act fast.
Jimoh warned the NRC against the proposed resumption of train services without first rescuing the kidnapped victims.
“It is true that we gave the Federal Government 72 hour ultimatum which expired yesterday (Thursday) idnight.
Jimoh said, “We are grateful to God that before the expiration of the 72 hours, we heard from the Federal Government after the Federal Executive Council meeting on Wednesday through the Minister of Information that the government is already on top of the situation with what has happened.
“We acknowledged it and we appreciate it. But what we want to add is that the government should speed up the process of discussion with them (terrorists) so that they can come out to release our people soonest. This is our appeal now.
“The NRC should not be talking about reopening their services now when our people are in captivity because what is the assurance that if they start services now the people that will board the train are safe”,
“What measure(s) have they put in place to guaranteed the security of those that are going to patronise their services. We don’t want the reoccurrence of this.
“The first thing should be to get the captives out and then they can put adequate measures in place and resume service so that this does not happen again in future.”
He warned that the families of the abducted persons will not take it lightly with the NRC if they go ahead to resume operations when their relations are still in captivity.
“Because human lives are involved, we believe they will not do that. We believe they won’t because they know what is at stake”, Jimoh said.
Also speaking, Faitma Ciroma, whose sister is among those in captivity called for the resignation of the Transport Minister.
She called on Nigerians not to elect the likes of the Minister as president in the 2023 presidential election.
Another relations, Dr. Abdulkarim Atta, said the terrorists had contacted him 11 times, telling him that the “they have their targets” the in ill-fated train.
He added that the terrorist told him that it was unfortunate that other people were taken away by them.
Atta whose 85 year old mother and sister are among those kidnapped, explained that he was given the opportunity by the bandits to talk to his aged mother and sister before the release of the Managing Director of the Bank of Agriculture, Alwan Ali-Hassan.
He said further that in the course of his discussions with them during the phone call, the terrorists told him, “that the state governor, (Malam Nasir El-Rufai) has been running his mouth and that is why they came to his doorstep and that this is just the beginning. That they would go further than this.”