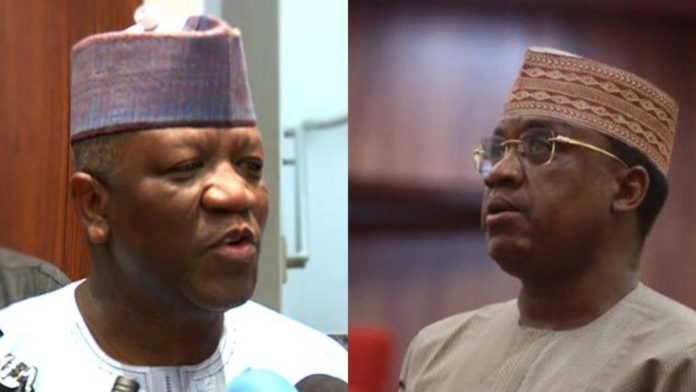 Former governor of Zamfara state, Alhaji Abdulaziz Yari, Senator Kabiru Garba Mafara and other top members of the All Progressives Congress (APC) in the state have defected to the Peoples Democratic Party (PDP).
Briefing journalists in Gusau on Sunday, the state of the opposition Peoples Democratic Party (PDP), Col. Bala Mande (rtd), confirmed that the party received Yari, Marafa and other top members of the who joined the party together with their supporters.
Mande said, “We have called you to brief you on the joining of our great party the PDP by the former governor, His Excellency, Alhaji Abdulaziz Yari, Senator Kabiru Garba Mafara and their supporters.
“They have joined us, we have reached an agreement and we are going to implement the agreement.
“We have agreed to be together in one party, the PDP and work together for the success of the party.
“We have also agreed to work extra hard in order to reclaim Zamfara state in 2023 and save its people from their present predicament”.
Speaking further, Mande said,
“I have given the stakeholders a complete update of where we are as a result of this development.”
Mande said Yari, Marafa and other top members of the APC would be officially received in Gusau at a colorful ceremony soon.
Yari has been protesting the dissolution of the state executive council of the APC by former caretaker chairman of the party, Mai Mala Buni.
He then set up a parallel faction of the party in the state.
Marafa’s faction also conducted a parallel congress.
However, the national secretariat of the APC recognised the executives produced by Zamfara state governor, Bello Matawalle’s faction.
Yari contested for the position of the APC national chairman in the recently concluded convention of the party.
He later stepped down after former Governor Abdullahi Adamu was chosen as the consensus candidate for the position.