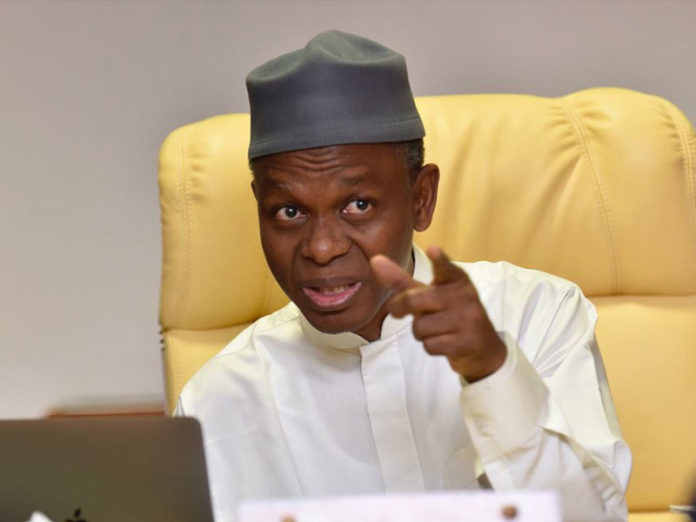 Governor Nasir El-Rufai of Kaduna state, has declared that he will break the ongoing warning strike by the Kaduna chapter of the Nigerian Labour Congress (NLC) and deal with the “criminals” that have violated the law.
The state chapter of the NLC, on Monday, embarked on a five day warning strike against mass sack of workers by the state government, allegedly, without following due process.
The warning strike is being led by the President of the NLC, Dr. Ayuba Wabba and other labour leaders.
Speaking at the 23rd Annual Tax Conference organised by the Chartered Institute of Taxation of Nigeria (CITN) on Wednesday in Kaduna, El-Rufai said, the labour leaders will
never come back to the state again “by the time we are done with them”.
According to him, the action of the labour leaders under the auspices of NLC which prevented business from operating, is criminal and illegal.
He said his administration was not against the right of workers to go on strike, pointing out that workers must allow their work place to function while on strike.
“There are efforts to prevent legitimate business to open, there are efforts to prevent banks from opening and also prevent petrol stations from dispensing fuel, this is totally criminal and illegal and we are going to take action.
“We are making efforts to provide security for all businesses that will wish to remain open”, El-Rufai said.
He added that, “We are not against the right to strike; you are free to strike, but walk away from your institution and allow it to function without you.”
The governor maintained that labour unions have no right to stop businesses from operating.
“You have no right to stop any business from remaining open and we are going to take very strict measures against people that have tried to do that.
“What this strike is about is to answer fundamental questions the first of which is this; should an employer, keep person of poor education, inadequate skills, qualifications and bad work attitude in employment, whether he likes it or not? Our answer in Kaduna state is in the negative.
“We as employer are in a contract of employment with the employee and if he is not up to task, we will let him go and that is included in our contract of service.
“The second question is this; is the right to protest or to withdraw services of an employee equivalent to the right to destroy the institution in which you work; shut it down or attack public infrastructure? “Our position is very clear, the law is very clear, you can walk out, you can strike, but you cannot shut anything down.”
According to the governor, “Public infrastructure is a public asset belonging to the federation which belongs to all the people in Nigeria and you have no right to shut it down and if you do, you are liable to be convicted on either the Miscellaneous Offences Act which attracts a minimum penalty of 21 years imprisonment.”
He vowed that his government will pursue all those engaged in “this sabotage to the full extent of the law”, El-Rufai said.
Speaking further, he said; “I want to assure you that we will break the strike and deal with the criminals, prosecute all those that have broken the law to the fullest extent and I assure you that they will never come back to the state again by the time we are done with them.”
El-Rufai, had on Tuesday, declared Wabba and other labour leaders wanted for alleged economic sabotage, vowing that he will arrest and prosecute them.
Meanwhile the protesting workers, on Wednesday restricted their activities to the state secretariat of the NLC to avoid the strike being hijacked by hoodlums.
On Tuesday, armed thugs, alleged to have been sponsored, attacked the workers during a peaceful procession from the NLC Secretariat along Independence Way to NEPA Roundabout, along Ahmadu Bello Way, both within the metropolis.
The workers had teamed up with the police who accompanied them during the procession to repel the hoodlums.
A detachment of armed security personnel has been deployed to the NLC secretariat to provide security for the workers.