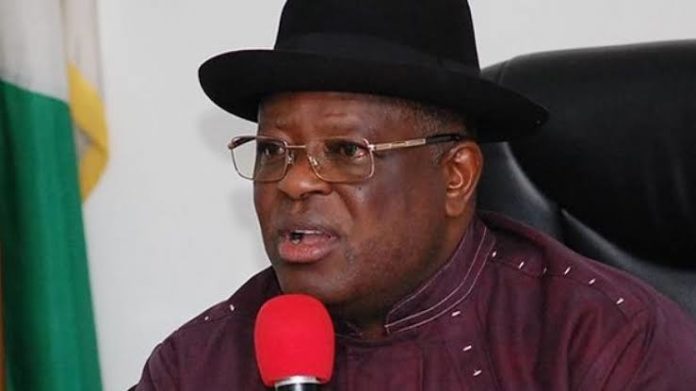 The governor of Ebonyi State, David Umahi, and his Deputy, Dr. Eric Kelechi Igwe, were on Tuesday, sacked by a Federal High Court in Abuja, for defecting from the Peoples Democratic Party (PDP) to the All Progressive Congress ( APC).
The judgement, delivered by Justice Inyang Ekwo, held that the total number of 393,042 votes Umahi secured at the March 9, 2019 governorship election in Ebonyi State belonged to the PDP, hence could not be legally transferred to the APC.
The court noted that both Umahi and Igwe’s defection to the APC, not only threw out the PDP, but also the votes that belonged to the party.
However, Umahi while addressing a press conference on Tuesday in Abakaliki, said the judgement which removed him and his deputy from office, was purchased.
Umahi said: “I am still the governor of Ebonyi state and there is no tension at all. In the first place, there is no constitutional provision for any hatchet man to remove a governor.
“There are three ways whereby a governor can vacate his office: it’s either by death, resignation and impeachment.
“There is no other constitutional provision that empowers a hatchet man to turn the Constitution upside down.
“We have heard the rumours before now that he was determined to give judgement against all known laws and the constitution, first to embarrass the APC, and to equally embarrass the federal government.”