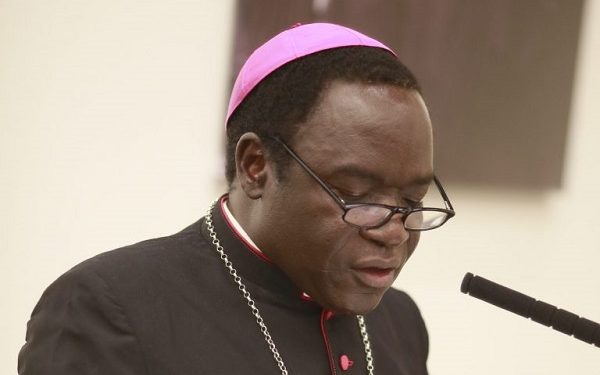 The Catholic Bishop of Sokoto Diocese, Matthew Kukah, has decried the state of the country, and urged for a change in the system.
Kukah said this on Wednesday during the Pastor E.A Adeboye’s eighth annual public lecture held at the Redeemed Christian Church of God camp, kilometre 46, Lagos-Ibadan Expressway.
He said, “Successive uncaring governments have created situations under which Nigerians are now suffocating, so when Nigerians say that they want out, it is not because those who are in do not belong to a better category; it is not because they think out is better than in. It is because they are convinced that even uncertainty is certain for them because they have come to believe, right or wrong, that elsewhere or anywhere is better than where they are now.
“Whether we call it restructuring, rotation, zoning, or whatever English name we choose to call, we know that something must happen; we need to disrupt this system because it is not working for other 90 per cent of many Nigerians. We need to bend the arc of justice for it to serve the people of Nigeria because we cannot continue like this without suffocating under the burden.
“When will Nigerians realise that the dark night of underdevelopment has stretched for so long that the dawn of development seems impossible? Can you imagine that after over 60 years of independence with trillions and trillions of dollars that have been spent, we still cannot provide ourselves with electricity? We still cannot provide ourselves adequate housing, and good roads, and we are still romanticising and nostalgic about our past? How can a country make progress while in reverse?
“The impact of years of maladministration has created the notion that due process, integrity, justice, charity, friendship, respect for mores and culture are objects of derision in Nigeria. Men and women have lost the culture of public service by virtue of an ingrained culture of nepotism. Nepotism and favouritism being perpetrated by leaders when deployed into public life subtracts trust and at the worst, breeds corruption even in the best of societies.”
The bishop noted that unity has to be based on facts and should not just be used as a word.
He added, “I have been accused of making divisive comments rather than appealing to citizens for unity. Again, unity is based on facts. This is like an abusive husband, you cannot convince a victim of domestic abuse to form unity with her husband unless he changes his character. So, unity is not just a bland word, if certain things are absent, there will not be unity.’’
The bishop also urged religious leaders to stop appeasing politicians with public endorsements.
“Religious leaders should not be silent in the midst of the moral turpitude. Much of what we call neutrality is an opportunistic political calculation aimed at ensuring that we would not lose our spaces in the queue for the corridors of power.
“This is our time to rescue our country. We should also stop misleading politicians and public officers by offering them the incense of public endorsements. There is a greater sense of urgency in our society to reassert the moral side of the Christian faith in our lives, politics and businesses,” he said.
Also, the president, African Development Bank, Dr Akinwunmi Adesina, called on governments to foster a sense of unity among Nigerians and invest in youths.
“Nigeria must strive for national cohesion and address the fundamental reasons of our agitations with understanding, remove our prejudices and allow for open national dialogues towards one goal: to attain a united, just, fair and an equitable nation for all.
“Governments must be open to representation based on nationality, not ethnicity to build a society of mutual trust where diversity is well manifest. We should also invest on youths and change the old cliché, ‘the young shall grow’ to ‘the young are here,’” he said.