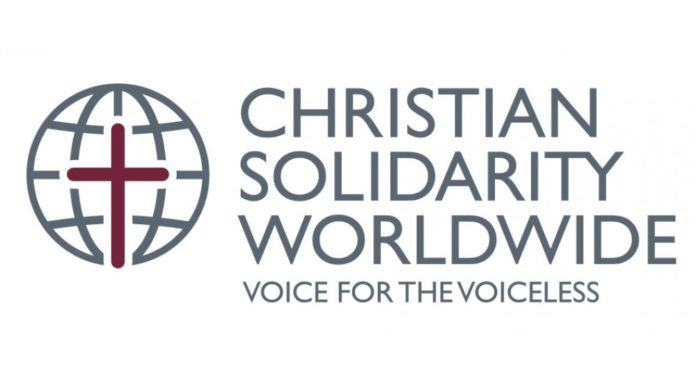 The Christian Solidarity Worldwide Nigeria (CSWN), has demanded justice for Ruth Ngladar Pogu and Hassana Adamu, two of the students of the Government Girls Secondary School, Chibok, Borno state recently freed from Boko Haram captivity. The two girls who have given birth to two children each, returned home with their captors who parade themselves as their “husbands” after seven years in captivity.
They were among the 276 female students abducted by when the terrorists invaded their school in April, 2014.

The Christian body, in a statement by Reuben Buhari, its Research and Press Officer, said the violators of the girls who parade themselves as their husbands must be brought to justice.
The statement said the terrorists who raped and forcefully “married” the girls should not be allowed to escape justice.
Buhari said, the Nigerian government may continue with its re-radicalisation programme with the worrying terminology of ‘repentant terrorists, noting however that Nigeria is governed by laws and the law must take its course.
The statement also called on the federal government to take full responsibility of rehabilitating the freed girls.
“After seven years in forceful, dehumanising and unlawful captivity, two abducted students of the Government Girls Secondary School in Chibok, Borno state have been found.
“First, it was Ruth Ngladar Pogu and the man erroneously referred to as her ‘husband’ who presented themselves to the security on July 28, 2021, in Bama.
“On Saturday, July 14, 2021, Hassana Adamu was also found with two children in Gwoza. Both girls were found with children from their abductors”, the statement said.
Buhari recalled that the school was invaded on April 14, 2014, by Boko Haram terrorists and 276 girls were taken away. Some escaped, some died and about 100 are still missing.

“The CSWN expresses its joy on this promising good news that holds the prospect of more girls getting their freedom.
“However, our concern stems from the fundamental human rights of these girls that were willfully violated”, the statement said.
Buhari frowned at the “careless use of the terminology – ‘husband’, in describing those that forced themselves on the girls and eventually sired children with them”, stressing that it is disheartening and insensitive to the victims to describe the terrorists as husbands of their victims.
The statement said, “The Nigerian government may continue with its re-radicalisation programme that birthed the worrying terminology of ‘repentant terrorists, but we in CSWN, in view of the fact that Nigeria is governed by laws, call for the full application of all relevant laws on those who violated the girls.
“This would show the supremacy of law over lawlessness and impunity, and a consolation to the victims of insurgency trying to rebuild their lives or still wallowing in IDP camps.
CSWN also calls on the “Federal government to take the full responsibility of rehabilitating the freed girls as a measure of its commitment to the enthronement of a decent society that Nigeria aspires to.”