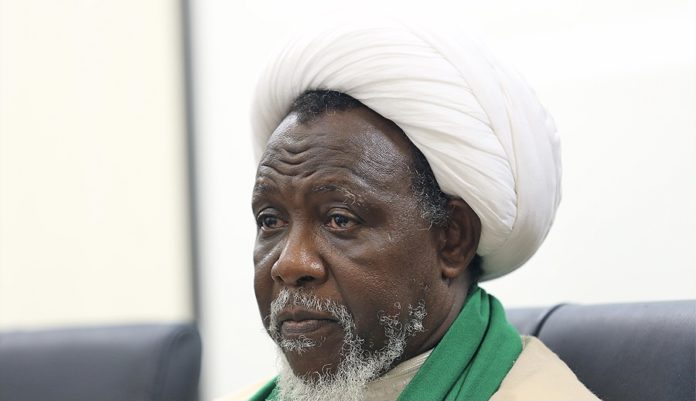 The leader of the Islamic Movement in Nigeria (IMN), also known as Shi’ite, Sheikh Ibraheem Zakzaky and his wife Zeenat, were on Wednesday, discharged and acquitted by a Kaduna State High Court after over five years in detention.
The presiding judge, Justice Gideon Kurada discharged and acquitted them while ruling in a no case submission by filed by the defense counsel.
The duo had been in detention since December 2015, following a clash between the Shi’ite members and soldiers in Zaria, Kaduna state.
The Shi’ite members who were said to be observing a religious ritual, had blocked the convoy of then Chief of Army Staff, Lt. Gen. Tukur Buratai (now retired) when he was in Zaria for the Passing Out Parade of the military school in the area.
What started as a confrontation with the convoy of the army Chief snowballed into a bloody clash between El-Zakzaky’s followers and soldiers who were deployed the next day to seal of the headquarters of the Islamic group.
Over 345 members of the Islamic Movement were killed and were buried in a mass grave in Mando area of Kaduna metropolis.
El-Zakzaky and his wife, were later arrested and had remained in detention since then despite an Abuja Federal High Court in 2016 which ordered for his released and N50 million compensation.
In an interview with journalists shortly after court session on Wednesday, one of El- Zakzaky’s counsels, Marshal Abubakar, said the court upheld their a no-case submission filed by the defense counsel and agreed that, the case lacks merit.
He said, “The trial of Sheikh Ibraheem Zakzaky and his wife, Malama Zeenat Ibraheem has come to an end today.
“The court has upheld our no-case submission. The court found that the charges that were filed in the year 2018 pursuant to a penal law enacted by the Kaduna state government in 2017 over offenses allegedly committed in 2015 is ab-initio”, Abubakar added.
Speaking furthe, he said, “The court ruled that the charge ought not to be in the first place, because you cannot arraign a man for an offence that was already committed as at the time the said crime was not an offence. And the Court was very emphatic on that.”
He agreed that though the Kaduna State government has powers to enact laws, “but they cannot enact law to prosecute an offence prospectively. That is the first ground on which the court held that, that charge was incompetent.”
Abubakar said, “On another footing, the no case submission we filed in court. The court agreed with us that the trial lacked merits, that the prosecution only came to court to tell stories that are at cross variance with the offences that were alleged in the charges.
“The court agreed with us that, El-Zakzaky and his wife have committed no offence.
“The Court however discharged and acquitted El-Zakzaky and his wife. It said there should not have been any charge against El-Zakzaky and his wife, Zeenat in the first place”.
The prosecuting counsel, Dari Bayero, however, did not address journalists as he left immediately after the court session.
Since the commencement of the trial to the end, journalists were barred from covering the proceedings and had to wait outside the court premises for briefings from both the prosecution and defense counsels.
Meanwhile, the IMN leader, along with his lead counsel, Mr. Femi Falana (SAN), were seen in the same vehicle as they drove out of the court premises.
El-Zakzaky and his wife were arrested in December 2015 following a bloody clash between his followers and soldiers in Zaria, Kaduna state.
Over 347 people, said to be members of the Shiite were killed during the incident and were buried in a mass grave at Mando area of Kaduna metropolis.
The IMN leader and his wife were being prosecuted by the Kaduna state government following the recommendation of a judicial panel which was set up in 2016 to investigate the clash.
The IMN leader and his wife stood trial on eight count charge of culpable homicide, disruption of public peace and unlawful assembly among others.
Meanwhile the IMN, in a statement on Wednesday reacting to the judgement, said it is a victory for perseverance in the face of extreme persecution by the Nigerian government.
According to the the statement signed by Ibrahim Musa, spokesman of the Islamic body, “The judgement has not only vindicated our leader and all members of the movement in Nigeria, but a victory for perseverance in the face of extreme persecution by the Nigerian government. It is a victory for truth and justice against tyranny and impunity”.
Musa said, with the court victory, “the false charges filed against them has finally been punctured for good after almost five years of excruciating illegal detention.”