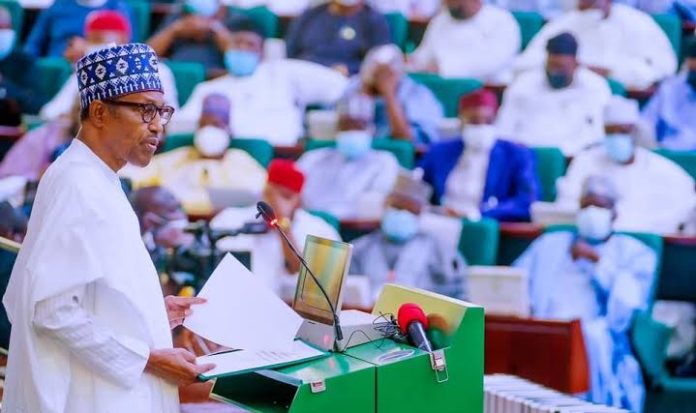 President Muhammadu Buhari has presented a budget of N20.51 trillion for the 2023 appropriation bill to the National Assembly. Buhari made the presentation on Friday to the joint session of the National Assembly at the temporary chamber of the House of Representatives.
The President said the budget tagged, “Budget of Fiscal Consolidation and Transition”, was designed to address critical issues and lay a solid foundation for the incoming administration.
He added that the revenue generation should hit about N16.87 trillion, is based on the parameters and fiscal assumptions.
A breakdown of the budget shows that N744.11 billion was earmarked for statutory transfers, N8.27 trillion for non-debt recurrent costs, N1.1 trillion for overhead costs, and N5.35 trillion for capital expenditure.
He said, “We expect the total fiscal operations of the federal government to result in a deficit of N10.78 trillion.
“This represents 4.78 percent of estimated GDP, slightly above the 3 percent threshold set by the Fiscal Responsibility Act 2007.
“As envisaged by the law, we need to exceed this threshold considering the need to continue to tackle the existential security challenges facing the country.”
According to him, the budget deficit will be financed mainly through borrowings.
This, according to him, would include new borrowings totalling N8.80 trillion, N206.18 billion from privatisation proceeds and N1.77 trillion drawdowns on bilateral/multilateral loans secured for specific development projects/programmes.
He said the sum of N470 billion intervention had been provided for in the budget estimates to fund tertiary institutions.
Buhari added that the Federal Government would not sign any agreement with the Academic Staff of Universities (ASUU) that would be difficult to implement.