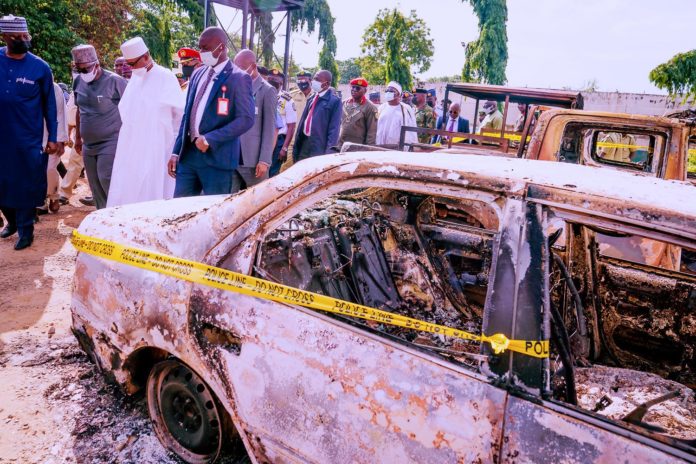 President Mohammadu Buhari has attribute Tuesday night attack on Kuje prison in the Federal Capital Territory (FCT), to failure of intelligence.
Buhari stated this on Wednesday when he visited the prison.
Meanwhile the Islamic State in West Africa Province (ISWAP) has claimed responsibility for the attack.
Buhari who visited the Correctional Centre on Wednesday expressed disappointment over the attack.
He wondered how terrorists could successfully “attack a security installation and get away with it”.
The President was briefed about the attack by the Permanent Secretary, Ministry of Interrior, Shuaib Belgore the and Controller General of the NCoS, Haliru Nababa, during the visit.
Garba Shehu, presidential spokesman, said Buhari expressed shock at the scale and audacity of the attack.
“How did the defences at the prison fail to prevent the attack? How many personnel did you have on duty? How many of them were armed?” the President was quoted as asking the prison officials.
Buhari was also said to have inquired about the number of guards on the watchtower and the functionality of the closed-circuit television (CCTV ) cameras in the facility.
Speaking with journalists after the inspection, Buhari said: “I am disappointed with the intelligence system.
“How can terrorists organise, have weapons, attack a security installation and get away with it?”
The President demanded for a comprehensive report on the incident.
Spokesman of the Nigerian Correctional Service ( NCoS), Abubakar Umar, disclosed in a statement on Wednesday that a total of 879 inmates escaped from the facility during the unfortunate incident.
The statement however said, 443 have been recaptured, 551 are currently in custody, while 443 inmates are still at large.
ISWAP, in a video released Wednesday night claimed responsibility for the attack.
In the video, the terrorists showed how some of their members entered the Kuje prison.
The 38 seconds video clip showed that the terrorists shot indiscriminately before gaining access into the prison.
The Islamic State’s A’maq Agency first released the video with a caption in Arabic. The caption read, “Fighters of Islamic State attacked Kuje prison in Abuja yesterday and succeeded in releasing many prisoners.”
The video showed an elderly man and young men shouting “Allahu Akbar”while claiming responsibility for the attack with many fighters marching as vehicles and building set on ablaze..
The Nigerian Correctional Service said four inmates died and 879 escaped during the attack.
According to the statement by the NCoS spokesman, the attackers broke into the Medium Security Custodial Centre, Kuje, using explosive devices through the main entrance and the fence of the facility respectively.
He disclosed further that, an official of the Nigerian Security and Civil Defence Corps (NSCDC) attached to the Custodial Centre was killed, adding that three officials of the NCoS were seriously injured.
“A total of 879 inmates escaped from the facility during the unfortunate attack. As at the time of this report, 443 have been recaptured, 551 inmates are currently in custody, 443 inmates are still at large”, the statement said.
Umar added that, “Four inmates are dead and 16 inmates sustained various degree of injuries and are being treated at the moment. However, efforts are ongoing to recapture all fleeing inmates”.
He also confirmed that Deputy Commissioner of Police, Abba Kyari, and other VIPs held in the facility did not escape.