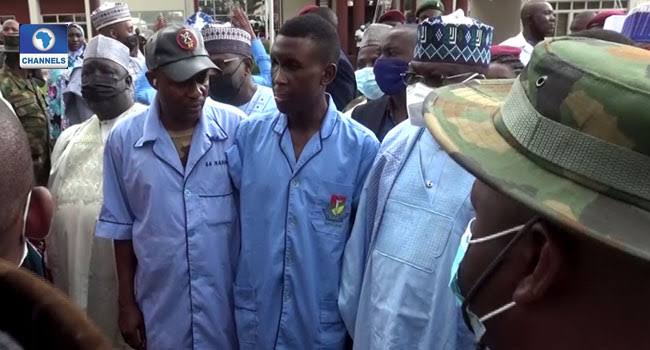 The Acting Chief Medical Director (CMD) of the 44, Nigerian Army Reference Hospital Kaduna, Colonel Stephen Onuchukwu, has disclosed that more than 7000 officers and soldiers wounded in counterinsurgency operations have been treated in the hospital.  Onuchukwu disclosed this on Saturday when the President of the Senate, Ahmed Lawan,
visit to the hospital as part of the activities marking the two years anniversary of the 9th senate.
He said the hospital is of international standard adding that its services are accessible to both the military and civilian populace.
He said most wounded officers and soldiers especially from the front line are brought to Kaduna for treatment and their medical were prioritised, adding that those that require surgery were operated within 24 hours.
He said, in the past few days, there has been a kind of cultural shift.
“Initially, most of the amputees were no longer useful, but with the model improved services, most of them are still being retained and trained in computer hardware repair among others to enable them to fit into new office engagement.
“We have enhanced programmes to help the amputees that will enable them to work as a noncombatant.
“For now, more than 7,000 of them have passed through the hospital within this period that we have counterinsurgency”, Onuchukwu said.
In his remarks, the Penate President said the visit was to show compassion and empathy to people who have given everything to defend the territorial integrity of the country.  Lawan added that the visit was also “an opportunity for us to see firsthand how we can be more responsive to the needs of our military hospitals because, beyond compassion and empathy, there are responsibility and obligations as people who represent Nigerians”
He said, “After the civil war in Nigeria, there was never a time that our military men have involved in warfare as we have now which means that some of our officers and soldiers will be challenged with wounds that require hospitalisation.”
Lawan said, “As a country, we are supposed to provide more resources to cater for the needs of those officers and men wounded in action.”
He commended the Nigerian Armed Forces for putting so much effort to tackle all the security threats across the country.
“This national assembly will do everything to provide resources for you as you may be aware that there is a complementary budget before us and as soon as we vacate this anniversary recess, NASS will expedite action to grant the request of Mr President on that supplementary budget”, Lawan said.