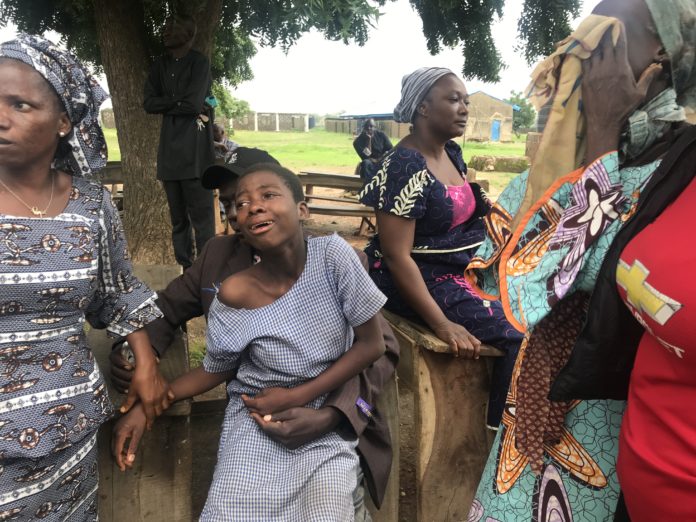 Bandits have released 28 of the students of the remaining 180 abducted students of Bethel Baptist High School, Damishi, Kaduna.
The bandits had on July 5, bandits invaded the school and abducted 121 students, aged between 13 to 19.
The bandits released them Saturday night at a location along Kaduna -Abuja road.
The children were conveyed in two buses on Sunday by leaders of the Baptist Church led by President of the Nigerian Baptist Convention, Rev. Israel Akanji and were
reunited with their parents at the school premises amid jubilation.
However, many of the parents were heart broken as their children were not among those released, as some of them parents wept profusely while others collapsed.
One of the students was earlier released by the bandits following ill health.
Two others were said to have been “rescued” by the police.
Addressing parents before handing over the children, President Kaduna Baptist Conference, Rev. Ishaya Jangado, the bandits will be releasing the children in batches.
“I have been talking with the bandits and they told me that the children would be released in batches and they have released the first batch of 28.
“I appealed to parents whose children are not among the first batch not to despair as they will be released too by the grace of God.
“If your child is not among those released don’t be disappointed, let’s keep praying”, he said.
Also speaking in an interview after reuniting children with their parents, President of the Nigerian Baptist Convention, Rev. Israel Akanji, said a lot of efforts were made to ensure the release of the children.
Akanji however denied claims by some parents that N100m was paid as ransom.
According to him, “a lot of efforts were mde to ensure the release of the students. The number one effort was prayers , we prayed and prayed .

“We spoke to security agents, we spoke to the governor of Kaduna state and he promised that he was going to do his best to ensure the release of the children.
“We have waited, it is about three weeks now and finally we are grateful that we have this batch that have come.
“All together we have received 34 students out of the 121. We are still expecting 87 who have not come back yet.”
Akanji said further that the children were released by the bandits themselves.
“The children were just released by the people who abducted them. They kept them in a place and they called us and we went and carried them in our vehicles and brought them.
“Our prayer is that they will release the remaining students”.
Akanji said the the church did not pay any ransom to the bandits.
“I don’t know where you got your information. I have heard a lot of information in the media. Some said we paid N60 million, some said we paid N100m…
“What we said is that as a church, we will not pay ransom because it is not right to pay people who have done what is wrong.
“However you know that we are not the only ones concerned about the children”, he said.
According to him, there are parents, well wishers and neighbours who are stuggling for the children for the children to be released, “therefore we cannot really restrict people from their actions in getting the children out, but as a group we do not believe in paying ransom.
“I cannot answer for those who probably must have been involved in certain ways.”