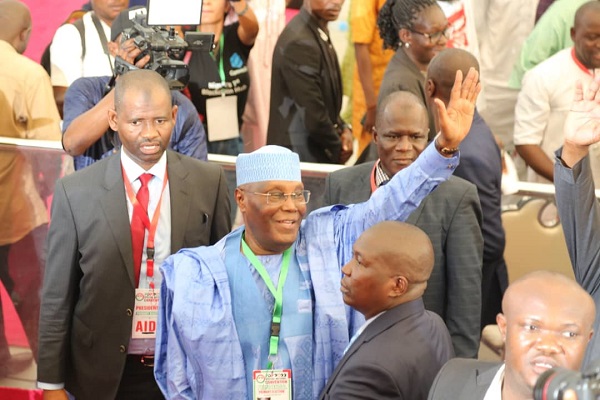 Former Vice-President Atiku Abubakar has again won the presidential ticket of the Peoples Democratic Party (PDP).
Atiku was the party’s presidential candidate in the 2019 elections, but lost to President Muhammadu Buhari of the All Progressives Congress (APC).
In the result of the primary election announced by the Chief Returning Officer and former President of the Senate, Senator David Mark, Atiku polled 371 votes to defeat his main challenger and Governor of Rivers State, Mr Nyesom Wike, who scored 237 votes.
Former President of the Senate, Dr Bukola Saraki came a distant third with 70 votes, while Governor of Akwa Ibom State, Mr Udom Emmanuel and his counterpart in Bauchi State, Senator Bala Mohammed scored 38 votes and 20 votes, respectively.
The delegates cast 763 votes; 12 votes were voided while the number of valid votes was 751.
A former Senate President, Senator Anyim Pius Anyim got 14 votes while Mr Sam Ohuabunwa and the only female aspirant, Terila Diana Oliver, got one vote each.
A former Governor of Ekiti State, Mr Ayo Fayose got zero, while the Publisher of Ovation, Mr Dele Momodu, also got zero votes.
The convention was held on Saturday at the MKO Abiola Stadium, Abuja.
One of the aspirants and  governor of Sokoto state, Aminu Tambuwal had before the commencement of voting, stepped down from the race and asked his supporters to vote for Atiku.
Also Dr. Nwachukwu Anakwenze and Mr. Mohammed Hayatu-Deen also withdrew from the race.
While Hayatu-Deen withdrew on Friday, Anakwenze announced his withdrawal during his remarks at the venue of the convention.
In his acceptance speech, Atiku pledged to unite the country, which he said, has been divided by the APC-led administration.
“Today, we are making another history which we believe will bring fundamental changes in the country, both by providing adequate security and fixing the economy,” he said.
The former Vice President described the election as one of the freest and a milestone to bring about democratic changes in Nigeria.
He called for the cooperation of his fellow contestants, promising to give them a sense of belonging in his administration.
He promised to deal decisively with insecurity and revive the economy.
Atiku also appealed to all aggrieved members of the party to return to the party, adding that the internal conflict resolutions would be reactivated to address and resolve all disputes.
The former vice president had in 1993, contested the Social Democratic Party (SDP) presidential primary, losing to Moshood Abiola and Baba Gana Kingibe.
He was a presidential candidate of the Action Congress in the 2007 presidential election, coming third to Umaru Musa Yar’Adua of the PDP and Muhammadu Buhari of the ANPP.
He contested the presidential primary of the PDP during the 2011 presidential election losing out to incumbent President Goodluck Jonathan.
In 2014, he joined the APC ahead of the 2015 presidential election and contested the presidential primary but lost to Muhammadu Buhari.
In 2017, he returned to the PDP and was the party’s presidential candidate during the 2019 presidential election, but lost again to incumbent President Buhari.