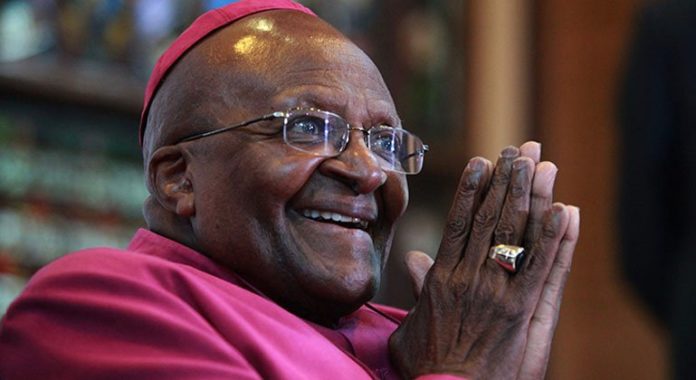 Archbishop Desmond Tutu, the South Africa’s anti-apartheid fighter has died at the age of 90.
The President of South Africa, Cyril Ramaphosa, announced Tutu’s death on Sunday.
Ramaphosa said, “The passing of Archbishop Emeritus Desmond Tutu is another chapter of bereavement in our nation’s farewell to a generation of outstanding South Africans who have bequeathed us a liberated South Africa.
“Desmond Tutu was a patriot without equal; a leader of principle and pragmatism who gave meaning to the biblical insight that faith without works is dead.
“A man of extraordinary intellect, integrity and invincibility against the forces of apartheid, he was also tender and vulnerable in his compassion for those who had suffered oppression, injustice and violence under apartheid, and oppressed and downtrodden people around the world.
“As Chairperson of the Truth and Reconciliation Commission he articulated the universal outrage at the ravages of apartheid and touchingly and profoundly demonstrated the depth of meaning of ubuntu, reconciliation and forgiveness.
“He placed his extensive academic achievements at the service of our struggle and at the service of the cause for social and economic justice the world over.
“From the pavements of resistance in South Africa to the pulpits of the world’s great cathedrals and places of worship, and the prestigious setting of the Nobel Peace Prize ceremony, the Arch distinguished himself as a non-sectarian, inclusive champion of universal human rights.
“In his richly inspiring yet challenging life, Desmond Tutu overcame tuberculosis, the brutality of the apartheid security forces and the intransigence of successive apartheid regimes. Neither Casspirs, teargas nor security agents could intimidate him or deter him from his steadfast belief in our liberation.
“He remained true to his convictions during our democratic dispensation and maintained his vigour and vigilance as he held leadership and the burgeoning institutions of our democracy to account in his inimitable, inescapable and always fortifying way.
“We share this moment of deep loss with Mam Leah Tutu, the Archbishop’s soulmate and source of strength and insight, who has made a monumental contribution in her own right to our freedom and to the development of our democracy.
“We pray that Archbishop Tutu’s soul will rest in peace but that his spirit will stand sentry over the future of our nation.”
Tutu won the Nobel Peace Prize in 1984 for fighting white minority rule in his country.
He was the first black Archbishop of Cape Town and bishop of the Church of the Province of Southern Africa (now the Anglican Church of Southern Africa). He received many international accolades during his long and illustrious life, including the Albert Schweitzer Prize for Humanitarianism in 1986; the Pacem in Terris Award in 1987; the Sydney Peace Prize in 1999; the Gandhi Peace Prize in 2007; and the Presidential Medal of Freedom in 2009.
Initially trained as a teacher after leaving school, he began studying theology after having taught at a high school for three years and was ordained as a priest in 1960. He continued his studies in England, culminating in a Master of Theology degree in 1966.
In 1975 he was appointed Dean of St Mary’s Cathedral in Johannesburg, the first black person to hold that position. From 1976 to 1978 he was Bishop of Lesotho, and in 1978 became the first black general secretary of the South African Council of Churches.
After the fall of apartheid, Tutu headed the Truth and Reconciliation Commission. He retired as Archbishop of Cape Town in 1996 after serving in that capacity for 10 years, and was made emeritus Archbishop of Cape Town, an honorary title that is unusual in the Anglican church.
In 1997, Tutu was diagnosed with prostate cancer and underwent successful treatment in the US. He was readmitted to hospital at various times thereafter to address the cause of recurring infections. Nevertheless, he has remained in good spirits.
Tutu is survived by Leah. They met while at college, and have four children.