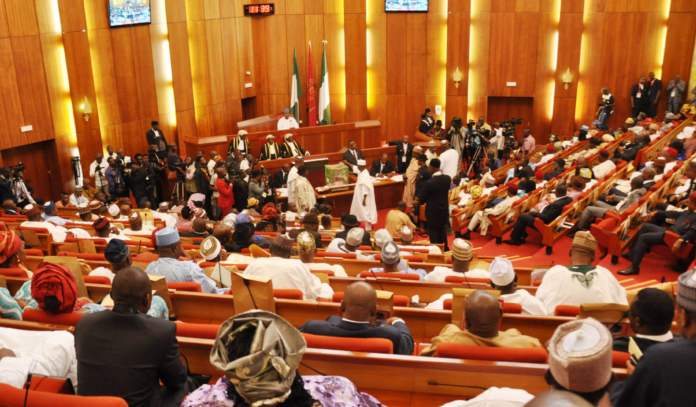 The Senate has urged the Independent National Electoral Commission (INEC) to allow duly registered and eligible prison-electorates to exercise their franchise during all general elections in Nigeria.
The upper legislature added that INEC should determine the status of the inmates that are constitutionally and legally qualified to be registered as voters.
The chamber also urged the Commission and relevant agencies to carry out voter’s enlightenment in all prisons in Nigeria, to educate the inmates of their rights and necessity to exercise their franchise in general elections.
It further called on INEC and all relevant agencies to update register of voters to take into account the prison population for the purpose of elections.
The Senate also urged the Commission (INEC) in collaboration with the Nigeria Correctional Service to locate Voting Centres at Custodial Centres across the country to be used for voting.
These were resolutions reached by the Senate following a motion sponsored by Senator Patrick Abba Moro (PDP, Benue South).
The motion was entitled, “The prerogative of Prison Inmates to vote in general elections in Nigeria: statutory, Inalienable and non-negotiable.”
Moro, in his presentation, said, “The Senate Notes that certain human rights are inalienable and come naturally with the birth of the individual. One of such rights is that of citizenship. Incarceration though is one of the legal grounds of depriving a person or an offender in custody of certain rights, the right of citizenship cannot at any point be taken away;
“Notes further that Citizenship as encapsulated under the Nigerian Constitution 1999 (as amended) comes with many defined rights and civic responsibilities, one of which is the right to vote in general elections;
“Notes again that there are certain persons in prison custody awaiting trial, undergoing trial or awaiting conviction for one offence or the other whose right to vote and citizenship remain sacrosanct;
“Notes that being a Prison inmate is not impediment to the Prisoners’ registration and voting rights as enshrined under Section 24 of the Electoral Act, 2022 and denying prison inmates access to the electoral process constitutes an infringement of their rights as Citizens of Nigeria as provided under Section 25 of the Constitution of the Federal Republic of Nigeria, 1999 (as amended) which confirms the definition of who a Citizen is as well as Section 12(1) of the Electoral Act, 2022 (as amended) which spells out who qualifies to vote; and;
“Considers that the number of inmates in various prisons nationwide which is put at over 68,000 and the Statistics of those awaiting trial who in the eyes of the law are presumed innocent until found guilty, it is forthright and just that such persons be allowed to exercise their franchise and any attempt by an individual or agency to deny inmates of their right to vote is unconstitutional, illegal, unlawful, null and void.”
Meanwhile, the Senate on Tuesday stepped down consideration of a report on the Proceeds of Crimes (Recovery and Management) Bill, 2022.
The report was by the Joint Committee on Anti-Corruption and Financial Crimes; and Judiciary, Human Rights and Legal Matters.
The Senate President, Ahmad Lawan, while calling for the report to be stepped down, said doing so would allow for robust contributions by lawmakers who were absent during the sitting.
He disclosed that the report would nevertheless be considered Wednesday during plenary.