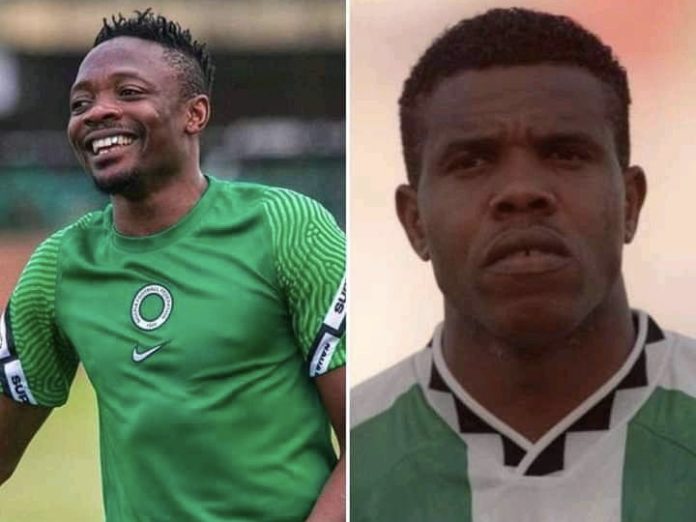 Kingsley Obiekwu, ex Nigerian International has sent words of appreciation to the Super Eagles captain, Ahmed Musa, and the generality of Nigerians for their genuine concern towards him following reports of economic plight.
Obiekwu had said that he went into the commercial transport business to complement his earnings from his coaching job.
The story elicited reactions from the public including Musa who made a cash donation of N2 million to the Atlantic ’96 Dream Team defender to cushion his financial crunch.
Speaking with the News Agency of Nigeria (NAN) on Thursday, Obiekwu said though the story came as an embarrassment to members of his family, there was nothing to regret for telling the world what he was passing through.
He said that when he wanted to go into the transport business years ago, his wife discouraged him on the grounds that it would be debasing for a man of his class in fame and fortune.
“I want to thank God for everything. Some members of my family have been calling me to express embarrassment over the story but I told them not to worry because I played the game and I know what I feel.
“The story is making impact with a lot of reactions, being a popular person, I cannot hide; Nigerians will be interested to know how their ex heroes are fairing, but I have told my family not to worry, that I will handle it.
So yesterday, the Media Officer of the Super Eagles who works in a radio station called me to inform me that somebody wanted to speak with me and I said he should give him my number.
“Musa called me and said he had heard my story and that he and his teammates will do something but meanwhile, I should give him my account number and in about an hour’s time, I got an alert of N2 million, I appreciate that a lot,” he said.
Obiekwu, who said he was forced to retire at 30 in 2004 due to health reasons, said a number of ex-internationals were passing through hard times, urging them not to be ashamed to speak out instead of dying in silence.
He advised active sportsmen and women to save and invest their earnings to avoid running into hitches when they retired.
He said, “if you don’t come out to tell Nigerians your story, they won’t know how to help you.
“So I encourage my colleagues to do what they can to keep body and soul together. there is nothing to be shameful for.”
Speaking further, he said, “As an ex-player, I want to advise the younger ones to save and invest because football and sports are something that you do within a period in life. If you retire, you begin to struggle if you don’t save enough.
“In my case, I did not waste my money, at least I have a house. Imagine the landlord throwing your property out because you can’t pay rent, it would have been worse.
“Our club managers and administrators should also complement the effort of state governments by making sure they pay players and coaches.
“I have players in my former clubs whose marriages have crashed because they can’t provide for their families, you can’t develop football without developing those making it happen.”