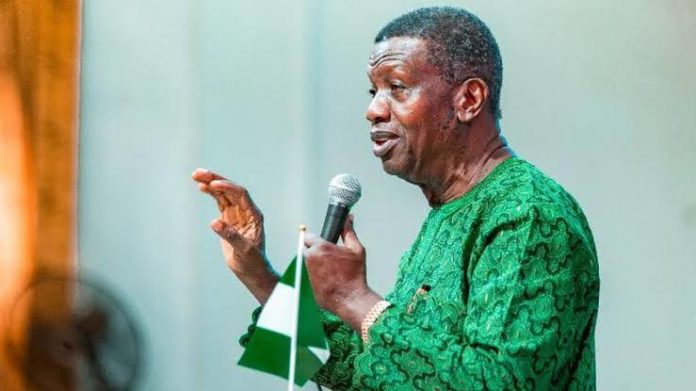 The General Overseer of Redeemed Christian Church of God (RCC), Pastor Enoch Adeboye, has urged christians to get jaw bones of cows instead of guns, stating that they don’t need guns.
Adeboye was clarifying an earlier message where he was quoted to have asked christians to buy guns for their self protection especially the churches during service, saying that Samson was victorious in biblical times with jaw bones and not an AK-47.
The respected cleric made this disclosure at Mount Carmel while delivering his message ‘Meant for the top’, in the church’s monthly thanksgiving service.
Recall that a Catholic church was attacked in Ondo State during Sunday service leaving scores killed and many others injured.
According to Adeboye, no one can be killed until the stipulated time, stressing that no one should stay away from church because of fear of being attacked.
Adeboye said, “I never asked christians to buy guns, christians don’t need guns. Samson did not fight with an AK-47. Don’t go and buy guns.”
While emphasising that they required permission to buy guns, he noted that they don’t require permission to get the jawbone of a cow.
There is a current embargo placed on gun licence and registration by the police authorities.
“You don’t need permission to buy the jaws bones of a cow,” the cleric added.
Adeboye bemoaned how difficult children could be thought about the exploits of Samson in a Sunday school, adding that jaw bones should suffice.
He added, “I have always wondered how you demonstrate to children in Sunday School but the best way is to show children using the jawbone of a cow. Don’t buy guns.”
Commenting further on how to escape from danger especially as it relates to sexual harassment against women and men, Adeboye stressed that they should show diligence and hard work to get to the top, and not wait to be contaminated.
“When it comes to someone contaminating you, slap, bite, kick, and run. When you see a brother smiling as you, run. There are battles you don’t wait to fight. Keep yourself pure,” Adeboye said.