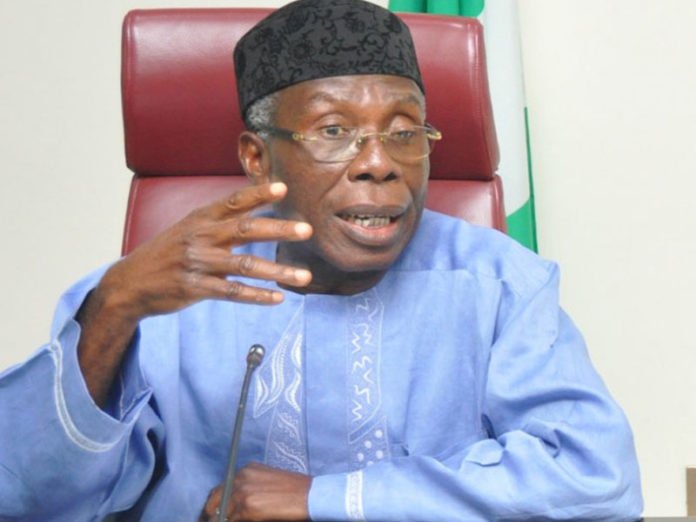 The Arewa Consultative Forum (ACF) has commended the position of South East leaders and governors on the violent agitation for secession from Nigeria by the Indigenous People of Biafra (IPOB) and Eastern Security Network.
The forum stated this in a communique at the end of its National Executive Council (NEC) meeting on Wednesday in Kaduna. The communique was read by Audu Ogbe, its national chairman and former agricultural minister.
The ACF “expressed satisfaction that the Igbo elders have finally disowned the agitators and called on the elders to take concrete measures to ensure that such agitations come to an end.”
Ogbe noted calls by southern leaders on Northern leaders to protect their indigenes who are living in the North, assuring that “all Igbo who are living in the North are guaranteed their personal security; sometimes they enjoy a security which even Northerners do not enjoy”.
He however urged south eastern leaders to stop the bullying and harassment of ordinary northerners eking a living in the south east.
“On the other hand, we have received reports on a daily basis of Northerners, ordinary citizens who are earning their daily life as nail cutters, suya makers, shoe shiners, onion sellers, are being bullied, beaten and even killed.
“We hope these ordinary Northerners are given the same protection we have given the South-Easterners in our midst”, the ACF chairman said.
He said in the very near future, the ACF hopes to meet with leaders of Ohanaeze Ndi Igbo, Afenifere and South-South leaders to discuss the lingering issues in the country that have tended to pitch ethnic and regional groups against each other.
Also speaking on the economy, the ACF expressed regrets over the high rates of interest charged on bank loans in the country.
“The interest charged by banks on commercial loans are so high that instead of promoting business, they are killing all indigenous business enterprises.
“No business can function in Nigeria or anywhere without a friendly environment of loaning from banks.
“We call on the government to intervene because the collapse of business has direct links with unemployment and insecurity”, the communique said.
While commending the federal government for the effort it is making to improve the state of infrastructure in the country, the forum lamented that “the northern part of the country, with the largest proportion of land (over 75%) and the highest number of population is definitely not getting its fair share of the new infrastructure being developed”.
Ogbe said further that “the forum is not happy with the scant attention paid to Animal Husbandry by states and the federal governments.
The ACF noted that, “Animal Husbandry alone accounts for 6% of our Gross Domestic Product (GDP) Nigeria spends $1.6 on importation of milk alone.
“If animal husbandry is well harnessed it will save Nigeria, this large expenditure.
Many Nigerians are not aware that those involved in the business of animal husbandry are themselves victims of insecurity their cattle are often rustled and they are kidnapped for ransom too.
“There is need to encourage alternative means of dispute resolution as those involved in farmers/herdsmen clashes are rural illiterates who sometimes are not comfortable with the police and the modern court system but would prefer traditional way of resolving issues.”
The forum also regretted that a laudable programme like the Normadic Education Commission, established during the Babangida administration has been abandoned and stressed the need for reviving and expanding “this laudable programme so that the pastoralists who have been profiled, exploited, abandoned and left behind by the modern society will also acquire skills to live in harmony with their brothers and sisters in Nigeria”.
The forum commended two Northern governors, Senator Atiku Bagudu of Kebbi State and Prof. Umara Zulum of Borno “who have demonstrated unusual courage in their fight against terrorism in their states and urged other governors in the North to demonstrate similar bravery in the fight against insecurity that is destroying the North.
The ACF also praised the gallantry of fighting forces who against all odds, have continued to risk their own lives in the fight against banditry and insurgencies.