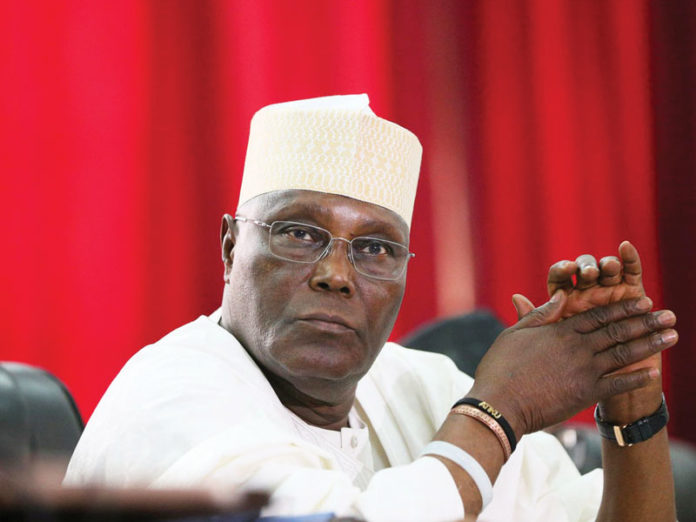 Supporters of Atiku Abubakar a former vice president have asked him to discard his Presidential ambition and leave the stage for younger people.
The group – “North 4 North Support Group for Atiku”,  also declared that, in the interest of justice, fairness, equity and national unity, the next President should come from the South -east.
In a statement on Monday in Kaduna, the group said Atiku Abubakar, who according to them, is “almost 80years, does not have enough in the tank to put in the high level of physical and mental efforts required to fix Nigeria.”
The statement jointly signed by Mohammed Garba and Abubakar Sanni the national coordinator and secretary of the group respectively, called on other presidential aspirants who are advanced in age, to quit the stage for young and vibrant people.
The group said, “Nigeria does not need more of the old, but a switch to the new, in order for paradigm shift in the management of affairs.
“The old ways have not worked and it is time for complete turn around of our fortunes and this will not happen if we limit ourselves by choosing from those who have tasted power before…
“We have promoted Atiku’s candidature for years, but we humbly call on the former Vice President to do us good in return for the many good returns we have done for him.
“We have sacrificed a lot pushing for the Presidency of Atiku Abubakar all these years, even though we have been abandoned by him after each election cycle, it is time for him to project national interest outside of his need to become president.
“At almost 80years, Alhaji Atiku Abubakar does not have enough in the tank to put in the high level of physical and mental efforts required to fix Nigeria.
“We equally call on other Aspirants who are old to leave the field and allow for young and vibrant candidate s to emeege and take the reins of power in 2023.”
It maintained that the South east is the only region that has not tested power since this democratic dispensation, insisting that Presidency should shift to the zone in 2023.
“We must give all parts of Nigeria a chance to become President of the country, or we might slide dangerously into the narratives of divisionists enemies of the state who will have a ready recruitment pool from among disgruntled groups”, the statement said.
It noted that “only one region in Nigeria has not been given a chance to take the presidency of Nigeria and it is only fair that 2023 almost a quarter of a century into our current democratic system the South-east is reminded that they are just as Nigerians as the rest of us”, the statement said.
The group argued further that “Fairness and equity is the major ingredient for sustainability of any society as history has clearly shown and Nigeria can be no exception to this clear and present rule of nation building; when a society begins to deviate from the principle of fairness and equity, it declines and slides down the rabbit hole of oblivion.
“The Presidency cannot also afford to go to an older candidate, considering the
enormity of the demands of the job in the 21st century, where there are series of
factors playing into a tectonic shift in economic centers of gravity, coupled with the many challenges confronting Nigeria that requires a proactive person with energy to cope with the rigours of office.”
The statement declared that, “The South east deserves the presidency of Nigeria come 2023, and we must narraow down our focus to searching for the best candidate from the region rather than allowing the public discourse space to be crowded by cacophony of distraction that will end up robbing us of the very best of us.”