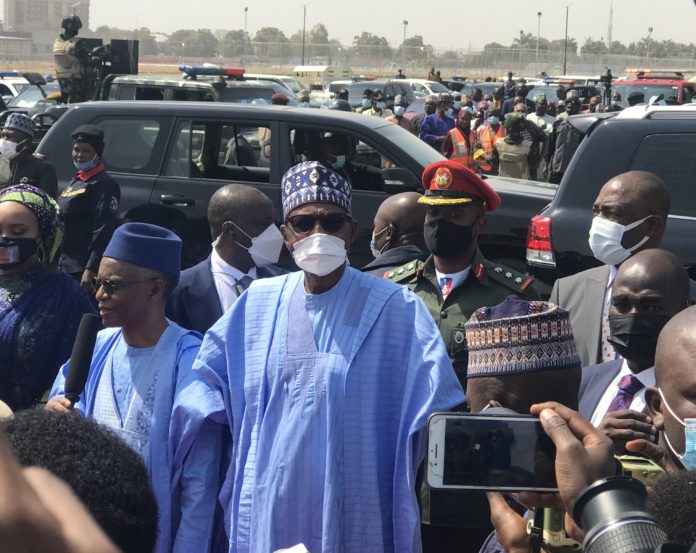 President Muhammadu Buhari on Thursday commissioned some projects initiated by the Kaduna state government amid tight security.
A combined team of heavily armed soldiers and the police were deployed to strategic places while helicopters were seen hovering around the city.
Kaduna is one of the northwest states under attack by bandits with people being killed or abducted almost on a daily basis.
The President arrived the state for the two day working visit on Wednesday night from Banjul, Gambia, where he attended the the inauguration of President Adama Barrow for a second term of office.
Buhari who was received by Governor Nasir El-Rufai and top government officials, commenced his activities in Kafanchan where he commissioned some road projects under the Urban Renewal Programme before returning to Kaduna at about 11:45am.
The President who flew in a helicopter, landed at the Murtala Square and commissioned the remodelled Square.
Buhari commended Governor Nasir El-Rufai for his achievements, saying he was impressed with the transformation that had taken place in Kaduna.
“You have been very successful and people throughout the country are appreciative of your achievements. You are writing your history in letters of gold,” Buhari told the governor while commissioning the remodelled Murtala Square, in Kaduna city.
Buhari also commissioned the multi billion remodelled Kawo over-head bridge along Zaria road.
Buhari recalled how he narrowly escaped being killed in a bomb blast around the near the bridge in 2014.
“They wanted to blow me here, but my escort somehow stopped them.
“Before we came to this bridge, they (the bombers) became so desperate and there was a small market or something like this here.
“They exploded the device. God protected us and here I am again. Thank you very much your Excellency and remarkably you became my governor. I don’t think I have any imput.
“Zainab became my minister of finance.
I didn’t know you are from the gentleman I respect and go to his house. This is fabulous coincidence and I thank God for it. Therefore, I have taken your loyalty for granted”, Buhari said.
He also thanked the governor for associating him with his ( governor’s ) success.
Other projects commissioned by the President, include the Infectious Disease Centre in Mando, LGEA Primary School, Lokoja Road, Rigasa, the Dangote Peugeot Automobile Nigeria Limited, the overhead bridge at Leventis, among others.
The President is expected to be in Zaria on Friday to commissioner more road projects under the Urban Renewal Programme.
The President’s visit was without the usual fanfare and celebrations as not many people came out on the street to welcome him.