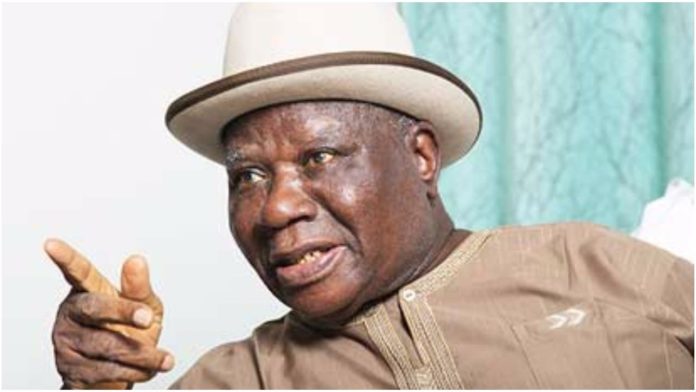 The Southern and Middle Belt Leaders Forum (SMBLF), have called for power shift to the South in 2023.
In a communique issued at the end of an expanded meeting of leaders of the forum on Sunday in Abuja, the group, “called on the leading political parties- the ruling All Progressives Congress (APC) and the opposition Peoples Democratic Party (PDP), to zone the Presidency of the country to the South come 2023.
It warned that any attempt to arrogate power to a particular section of the country will further aggravate the existing tension in the country.
The communique also called on the federal government to heed to the unending calls for a transparent national dialogue, as a step towards restructuring and reuniting the country.
The communique noted that by the end of President Muhammadu Buhari’s tenure in 2023, the north “would have enjoyed the Office of the Presidency of the country for the full statutory period of 8 years by 2023, hence, should yield to the South”.
The meeting which was chaired by an elder statesman, Chief Edwin Clark, had in attendance leaders of various socio-cultural organizations from the South West (Afenifere) South East (Ohanaeze Ndigbo)
South-South (Pan Niger Delta Forum -PANDEF) and the Middle Belt (Middle Belt Forum -MBF).
Also in attendance, were former governors, former ministers and former members of the National Assembly from the respective zones.
The meeting exhaustively discussed various issues concerning state of the nation, the issues of insecurity, national dialogue, restructuring and the preparations for the 2023 general elections.
The communique reminded the APC and PDP that, “that the basis of any viable democracy, especially in a diverse and complex country such as Nigeria, is fair and even sharing of power”.
The forum enjoined “political stakeholders from the South not to be lured to the unpatriotic step of seeking such other positions as National Chairmen of the main political parties, but join forces to demand and ensure that the Presidency moves to the South in 2023”.
SMBLF further called on the federal government “to urgently come up with firm and proactive strategies to restore peace and security to all parts of the country, for the peace and stability of the polity and the wellbeing of the citizens”, pointing out that “if the security situation is not dealt with, it would not be feasible to have acceptable elections in 2023”.
It condemned “the cavalier attitude of the federal government towards the resolutions of the governors of Southern states at their meeting, held in Asana, Delta State on 11th May 2021”, insisting that “cattle rearing is a business enterprise, as such, the federal government should avoid committing state resources to promote any particular business, beyond providing the enabling environment and performing its regulatory roles”.
The forum noted the present effort by the National Assembly to amend the 1999 Constitution, urging that the necessary courage and statesmanship should be displayed to ensure that the process culminates in the fundamental restructuring of the country.
SMBLF expressed its condolences to the families of the late Chief of Army Staff, Lt. General Ibrahim Attahiru, and 10 other military personnel, who died in the unfortunate military plane crash in Kaduna on May 21, 2021.
It called on the military authorities to carry out a thorough investigation to ascertain the actual cause of the crash.
The forum reaffirmed its commitment to the unity of Nigeria, which it maintained, could only be sustained on the principles of equity, fairness and justice.
The communique was signed by Chief  Edwin K. Clark, leader of SMBLF, Chief Ayo Adebanjo leader, Afenifere, Prof George Obiozor, President General, Ohanaeze Ndigbo and Mr. Pogu Bitrus, National President, MBF, among others.