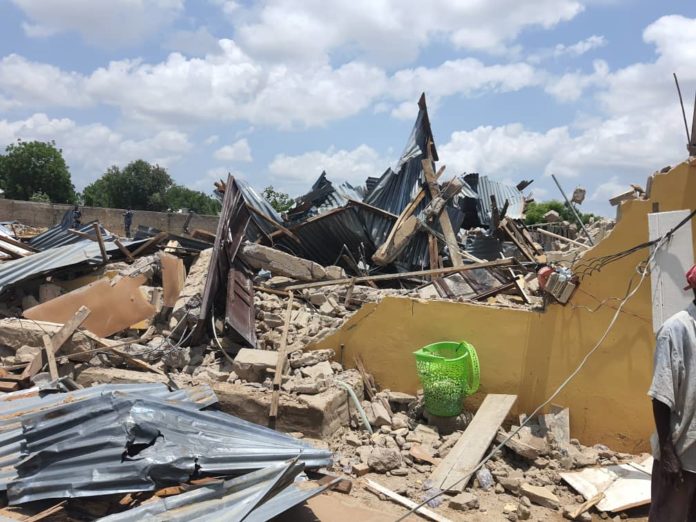 The pastor of the church that was demolished in Maiduguri by the Borno state government, Rev. Shawulu Ndahi, has asked the Borno state government to rebuild the church.
He also demanded compensation for the family of Mr. Ezekiel Bitrus, who was allegedly killed by an operative of the Borno Civilian Joint Task Force (CJTF) attached to the BOGIS while protesting against the demolition of the church.
Officials of the Borno Geographic Information Service (BOGIS) had on Wednesday demolished the Ekklesiyar Yan’uwa Nigeria (EYN) also known as Church of the Brethren, located in Moduganari area of Maiduguri, the state Capital on the grounds that it was illegally constructed.
The state governor, Prof. Babagana Zulum had ordered for investigations into the the incident.
Ndahi insisted that the government must assist the family of the deceased.
He said on the day the church was demolished, “we received a distress call that some officials of BOGIS in company of some CJTF and graders came and demolished our church with all facilities destroyed.
“In the process, some of our aggrieved members started hurling stones at the officials of BOGIS, before some CJTF members opened fire after seizing their communication gadgets, which led to the killing of Mr. Ezekiel Bitrus.”
The clergy man said, “In view of these unwholesome conduct, we are hereby displaying all our certificate of occupancy and other relevant documents used in acquiring this land which are legal documents.
“Therefore, as a church which believes in peace and unity, we have some immediate demands from Governor Zulum to; immediately reconstruct our demolished church and other facilities including our pure water factory.”
Ndahi called on the state government to immediately remove Adam Bababe as head of BOGIS, the agency of government responsibility for land administration .
He further called on the state government to lift the ban on the teaching of Christian Religious Knowledge in its primary and secondary schools.