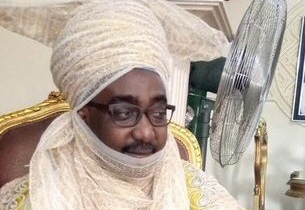 Ahmad Bamali, emir  of Zazzau, (Zaria), Kaduna state, has lamented over the frequent cases of banditry and kidnappings in his domain.
The emir spoke on Monday while receiving heads of security agencies in the state, who paid him a courtesy call.
The heads of the security agencies were led by Samuel Aruwan, Kaduna state commissioner for Internal Security and Home Affairs.
Bamali said security the challenges in his area has reached an alarming rate, such that children can no longer go to school as bandits moved about unchecked.
The emir described the security situation as unacceptable, adding that, residents of Zaria feel vulnerable and are living in a state of fear.
Last Thursday, bandits invaded the Kaduna state owned Nuhu Bamali Polytechnic located along the Zaria-Kaduna road in the night and killed one student and abducted 10 others including two lecturers.
Also in the early hours of Sunday, 12 people  were abducted by gunmen in an attack on a new residential area of Kofar Gayan/Kofar Kona axis of Zaria.
The emir said despite the several military formations in Zaria and environs, residents  feel very unsafe due to the activities of bandit.
He called for urgent security action to check the activities of criminals.
“We are calling on security personnel and agencies to rise up to the challenge and put an end to this sad situation.
“We have several military formations in Zaria and environs yet our people are feeling unsafe due to banditry,” the emir said.
Speaking earlier, Aruwan assured the emir that heavy security had been deployed to the 12 Local  Government Areas that make up the Zazzau Emirate.
Aruwan however said, it is not possible for security agencies to be in every community and called for collaboration between security agencies and community leaders in the area of intelligence gathering.
The delegation also commiserated with the emirate council over the recent attacks and kidnappings of residents of the area.