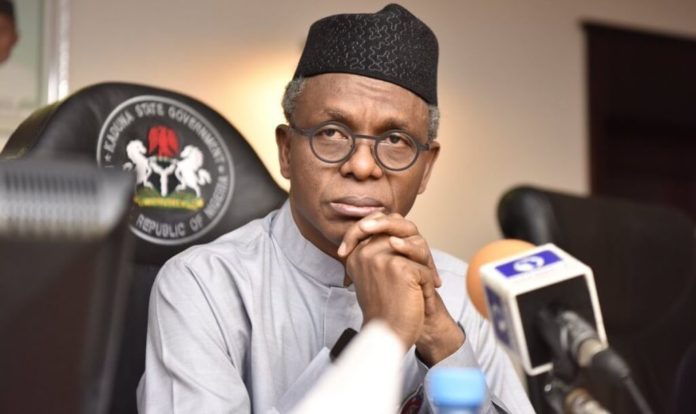 The Kaduna state governments has announced the dismissal of all nurses below Grade Level 14 for the illegal strike.
The state governor, Mallam Nasir El-Rufai also declared the President of the Nigerian Labour Congress (NLC), Dr. Ayuba Wabba, wanted.
A statement issued on Tuesday by the Special Adviser on Media and Communication, Muyiwa Adekeye, said the state Ministry of Health had been directed to advertise vacancies for the immediate recruitment of new nurses to replace those dismissed.
The statement also disclosed that “nurses disconnected oxygen from a two-day old baby in an incubator on Monday at the Barau Dikko Teaching Hospital, when they joined the National Labour Congress(NLC) strike.”
The statement added that apart the nurses involved had been recommended to the Ministry of Justice to initiate prosecution.
The statement also directed all government Ministries, Departments and Agencies to submit their attendance registers to the Head of Service while those in Kaduna State University should submit same to the Secretary to the State Government and the Commissioner of Education.
Adekeye said “salaries that could have been paid to the dismissed nurses will be given as extraordinary occupational allowances to the health workers who are at their duty posts to fill the gap of those absconding from duty.”
The statement commended “doctors and some categories of health workers that are trying to run public health facilities.
Adekeye expressed “regrets that some nurses have joined the unlawful strike and engaged in sabotage of some of our health facilities.”He said, “Nurses were implicated in the forceful discharge of patients in many health facilities.’’
The government also warned that any academic staff of KASU that does not report for work will be dismissed, adding that government ‘’will not tolerate the brazen shutdown of electricity, attack on public infrastructure and buildings, locking up hospitals and forcefully discharging patients.’’
The statement said the actions of the NLC was “equivalent to the actions of the bandits kidnapping and menacing our citizens. “Bandits illegally use arms, but the NLC is deploying mob action for exactly the same ends.
“Efforts to dress up criminal activity as industrial action do not change the reality of lawbreaking that has unfolded, including their persistently ignoring the prohibition against impeding essential services,’’ Adekeye said.
He reiterated that the President of the NLC, Dr. Ayuba Wabba “and his senior confederates in the NLC have been declared wanted and will be vigorously prosecuted for violations of the Penal Code of Kaduna State, the Miscellaneous Offences and the Trade Dispute (Essential Services) Acts.”
The statement advised Wabba “and his cohorts to report to the Ministry of Justice and the Police Headquarters to make their statements.’’
Also in speaking with journalist in an interview on Tuesday, Governor Nasir El-Rufai declared that he will not negotiate with striking workers.
The governor also declared the President of the Nigerian Labour Congress (NLC), Dr. Ayuba Wabba wanted for alleged “economic sabotage”.
The Kaduna state chapter of the NLC had on Monday commenced a five day warning strike to protest against the sacking of thousands of workers by the state government.
Speaking in an interview with journalists on Tuesday in Kaduna, El-Rufai accused Wabba for allegedly attacking facilities, declaring that he will be prosecuted for economic sabotage.
“They attacked facilities, they engaged in economic sabotage, that is an offence under the Miscellaneous Offences Act and we want him, we will bring him to justice.
“We are looking for him, he should report to the nearest police station or report to us. He will be prosecuted for economic sabotage”, the governor said.
He also declared that there is no ground for any compromise with the NLC, insisting the labour union has used its last ultimate weapon and he will not change his position.
“There is no grounds for compromise, they (NLC) have used their last ultimate weapon, it will not change anything, we will not change our position”, El-Rufai said.